Climate group Extinction Rebellion has condemned a ban on protests in London, but says its campaign will go on. The prohibition, after a week of action, came after activists targeted the UK's financial district. 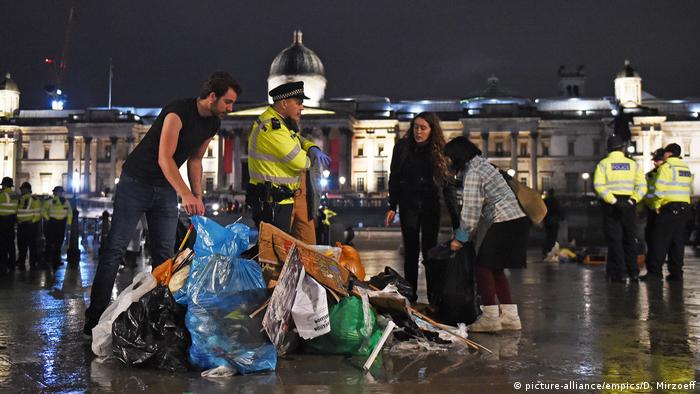 Extinction Rebellion condemned a police ban on its activities in the UK capital, after being forced to relinquish the focal point of its protests in London.

London's Metropolitan Police on Monday changed the conditions of an order previously imposed on protests in the city. "Any assembly linked to the Extinction Rebellion 'Autumn Uprising' must now cease their protest(s) within London," said the new wording of the order. Police said the ban was necessary due to "ongoing serious disruption to the community."

However, protest action continued in the UK capital on Tuesday, with one protester supergluing herself to the entrance of the UK Department of Transport.

The group officially left its main protest site at Trafalgar Square on Monday evening after police said they would arrest anyone who did not leave. Several arrests were made, including a member of the European Parliament (MEP) from the Greens, Ellie Chowns.

By Tuesday, the square was fully cleared and occupied by police.

In a tweet, Extinction Rebellion said "an unprecedented, political, decision has been taken to shut down peaceful protest calling out the government for inaction in the face of crisis."

However, police made no immediate move to shut down another protest camp in the Vauxhall district.

Mixed messages from the mayor

Confusion over the ban continued when London's mayor issued several statements following the decision. The last one, after Sadiq Khan faced criticism from the public and his Labour allies, sought to stress that the measure did not constitute a blanket ban on Extinction Rebellion protests.

"I have received assurances that neither Extinction Rebellion nor other climate change protesters are banned from protesting lawfully and peacefully in our city," Khan said in the statement.

'A moment to pause and remember'

Announcing that it would leave the Trafalgar Square site, Extinction Rebellion, which is calling for net-zero emissions by the year 2025, urged the government to act.

"The Climate and Ecological Emergency isn't going away and we remain resolute in facing it," it said in a statement.

"This is bigger than all of us. To rebels, this is a moment to pause and remember why we are here."

Before the ban, Extinction Rebellion protests had targeted the financial district of London, with a protest outside the asset management giant BlackRock, as well as the Bank of England, Bank of China and Barclays.

Police say 1,457 Extinction Rebellion activists have been arrested in London over the past week. The group says similar numbers of people have been detained at protests in some 20 cities around the world. Events have taken place in countries that include Germany, the Netherlands, Australia, Canada and New Zealand.