In the EU's game of "refugee bingo," far-right Italian Interior Minister Minister Matteo Salvini can only win. He has little reason to give in to states looking for lasting migration policy, says DW's Bernd Riegert. 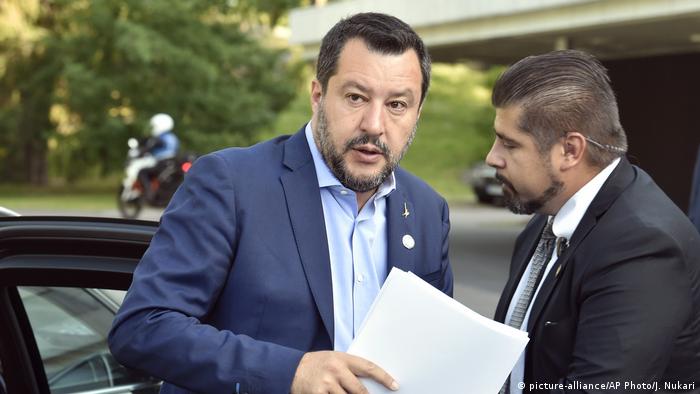 "Miserable" was the word German Interior Minister Horst Seehofer used to describe the current situation for migrants fleeing to Europe from Libya. It's a reference to "refugee bingo," cynical jargon for the game the European Union plays whenever a private rescue ship saves dozens of migrants on the Mediterranean Sea and brings them to Italian shores. The EU commissioner for migration gets on the phone with interior ministers from around the bloc, cajoling them to take a handful of people. Then the merciless haggling begins.

The process has become a rallying cry for Italy's far-right interior minister, Matteo Salvini, who has achieved domestic political success by stoking anti-refugee sentiment and presenting himself as the unyielding protector of Italian interests. Close the ports, deter the migrants, problem solved — that's Salvini's populist recipe.

A few EU member states, notably France and Germany, have had enough of this game. They want a lasting arrangement that determines which country takes in how many migrants.

We can probably thank the courageous ship captain Carola Rackete for Seehofer's support in finding a solution. Her daring landing on the Italian island of Lampedusa made global headlines. Now, on the same day interior ministers meet in Helsinki, Rackete is facing prosecution in Italy. Salvini wants to see the German "pirate," as he falsely calls her, thrown in jail for saving exhausted migrants. The case has been cause for solidarity in Germany. It's even got Angela Merkel's feuding government coalition seeing eye to eye.

No one taking responsibility

Yet the Helsinki meeting has made clear that nothing will change in the near term. An agreement will have to wait at least until September. Until then, the miserable game continues, largely because Italy and those countries ready to do more cannot agree on one point: Other member states are only willing to accept migrants with a good case for asylum. The rest, accounting for at least 70 percent of all migrants, would have to stay in Italy.

Salvini wants to see all of the migrants sent elsewhere, immediately, and not be left with the hopeless cases. He knows that it can be difficult to deport them back to their countries of origin. Other receiving countries, such as Germany, know that deportation is now off the table for those who don't stand a chance at asylum. That would explain why they are sticking to the rules as they are: Migrants are registered in the arrival country, in this case Italy, which decides who deserves asylum protection and who doesn't. That can take months, then more months until other EU members agree to actually take those asylum-seekers.

Even if a time-limited redistribution of the relatively few people brought in by rescue ships is agreed to, the larger problem remains. The EU's asylum system needs reform that redefines responsibility and quotas — a huge step for a hopelessly divided bloc that has been negotiating for years and remains far from a solution. The EU's eastern states, along with Italy and Austria, have been the biggest obstacles of all.

Incoming European Commission President Ursula von der Leyen says she wants to untie this Gordian knot. But she'll enjoy little success so long as Salvini-like populists in Italy, Hungary and Poland are in charge. Migration is the ongoing crisis they can repeatedly pick up votes with, no matter that, in absolute figures, the number of people coming to European shores keeps dropping dramatically. So why change course? It is a matter of putting self-interest before compassion for refugees and migrants.

Russia to send nuclear-capable missiles to Belarus 6h ago