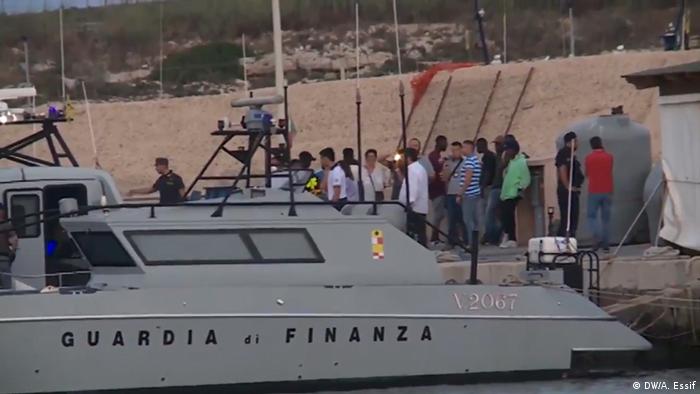 An Italian coast guard ship has brought ashore 55 migrants who were rescued in waters off the island of Lampedusa on Thursday.

DW correspondent Amien Essif witnessed the arrival of the vessel.

The coast guard patrol boat belonged to the same border command that refused entry to a rescue ship operated by the NGO Sea-Watch last Saturday.

The captain of the Sea-Watch 3, Carola Rackete, had said she needed to enter the port  to ensure the safety of 42 migrants who were aboard her vessel. The Sea-Watch 3 damaged an Italian patrol boat on its way into the harbor.

While those migrants were rescued off Libya, authorities told DW's Essif that in the latter incident the coast guard boat had picked the migrants up from just off the coast of Lampedusa itself.

Since the election of a populist government in 2018, Italy has taken a hard line on accepting migrants rescued in the Mediterranean.

Italian Interior Minister Matteo Salvini has closed ports to boats arriving with migrants. Italian authorities have insisted that migrants rescued in Libyan waters are the responsibility of the Libyan coast guard, and have accused NGOs who rescue migrants off the North African coast of facilitating people smuggling.

Vessel in distress off Libya

In response to news that another vessel — the Italian aid ship Alex — had rescued dozens of migrants on Thursday off the Libyan coast, Salvini insisted they should be taken to Tunisia.

"Otherwise we will activate all procedures to prevent Italy being a port of arrival for human traffickers," Salvini tweeted.

The vessel, operated by the NGO Mediterranea, now faces a search for a port where refugees will be able to disembark.

"We are enormously happy to have snatched 54 people from the hell that is Libya," the group said. It added that among those saved were four children and three pregnant women.

The dangers of migrants making the journey across the Mediterranean were underlined on Thursday, with more than 80 people feared dead off the coast of Tunisia. The Tunisian coast guard said a vessel carrying the migrants appeared to have capsized.

The International Organization for Migration said that the boat had foundered near the city of Zarzis and that 82 of the migrants on board were missing. Four were rescued from the water, one of whom later died.

The migrants were fleeing Libya, where an airstrike hit a migrant detention center a day earlier, killing 44 people and wounding 130.

Ongoing violence in Libya, a gathering point for many refugees from throughout Africa, has prompted many people to attempt the crossing to Italy despite the risks.

There is a weak, UN-recognized government in the Libyan capital, Tripoli, vying for power against militias allied with warlord Khalifa Haftar.

The Tripoli government has blamed Haftar's troops for Wednesday's airstrike. The UN blamed the tragedy partly on the European Union's policy of supporting Libyan militias to prevent refugees from attempting the dangerous Mediterranean crossing.

Dozens were killed in an air strike on a center housing migrants on the outskirts of Tripoli, with many more wounded. Center officials blamed the attack on forces loyal to Khalifa Haftar, but his militants denied it. (03.07.2019)