Carola Rackete, the 31-year-old German captain of a migrant rescue vessel, was detained in Italy after refusing to stand down in the face of military orders. Italy had banned the Sea-Watch ship from entering its waters. 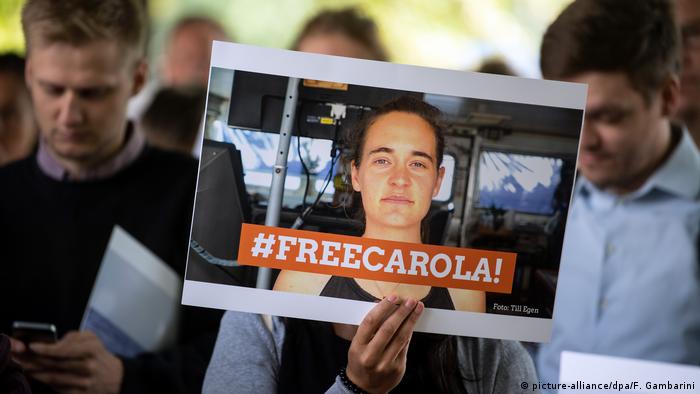 Italian judge Alessandra Vella on Tuesday ruled that Sea-Watch captain Carola Rackete had not acted against the law when she refused to comply with a ban on entering Italy's territorial waters.

Italian prosecutors requested the judge uphold a house arrest order in place since she was detained over the weekend. But the judge overturned the order, saying Rackete was "doing her duty saving human lives."

"We are relieved our captain is free," Sea-Watch International said in a tweet. "There were no grounds to keep her arrested, as her only 'wrongdoing' was to enforce human rights on the Mediterranean and to take responsibility where none of the European governments did."

Rackete captained a vessel carrying more than 40 migrants. After weeks at sea, she decided to port in Lampedusa, dismissing a military order banning her vessel from entering Italian territorial waters. While attempting to dock her ship, she rammed into a police boat that was trying to block her maneuvers.

Interior Minister Matteo Salvini, who leads the far-right League Party, has threatened to use any means necessary to prevent vessels rescuing migrants off the coast of Libya from entering Italy. He has accused them of human trafficking.

But Sicily-based prosecutor Luigi Patronaggio on Tuesday told Italian lawmakers that investigators have yet to find evidence that rescue vessels, such as the Sea-Watch 3, were implicated in a trafficking scheme to funnel migrants to Europe

Nearly half a million irregular migrants have crossed the central Mediterranean and made landfall in Italy since 2015, according to the International Organization for Migration. Since January 340 migrants have died attempting the dangerous journey.

The standoff between Sea-Watch 3 and the Italian government ended with the arrest of Captain Carola Rackete, who now faces prosecution. But international maritime law and a country's own laws often don't chime. (01.07.2019)