A conflict between Libya's competing government factions has placed refugees in the middle of a bloody power struggle. A deadly airstrike on a detention camp is just the latest attack to target refugee facilities. 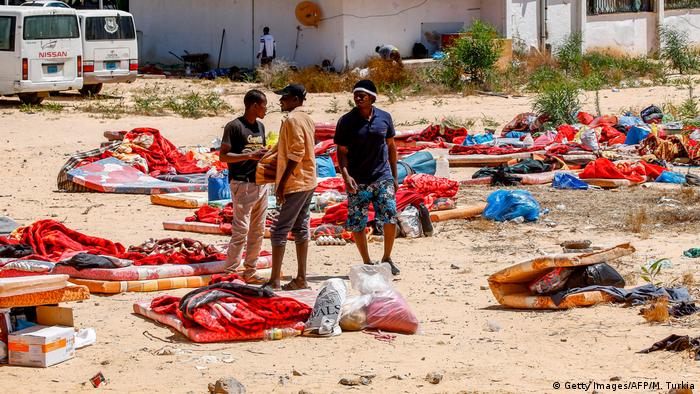 Thousands of refugees making the perilous journey to Europe land in Libya, where they suffer exploitation, abuse and violence. Most are stranded there, forced to endure inhumane conditions at detention centers.

According the United Nations Refugee Agency (UNHCR), around 3,300 refugees and migrants are currently being held in and around Tripoli. Some of them are in Tajoura, east of the capital, where an airstrike recently killed at least 44 people.

"It was a surprise attack that killed innocent people who were forced into the camp under the worst of circumstances," he said.

The attack was the second the camp and its 600 occupants have suffered. Since the power struggle began in 2014 between the internationally recognized Government of National Accord (GNA) led by Prime Minister Fayez al-Sarraj and the Libyan National Army (LNA) led by General Khalifa Haftar, there have been several attacks on or near refugee camps.

The UN estimates that roughly 100,000 people in Libya are fleeing violence within the country.

The al-Sarraj government blamed Haftar's militia for the attack — Haftar recently announced that his troops would begin an offensive in Tripoli.

Wolfgang Pusztai, chairman of the advisory board of the National Council on US-Libya Relations in Washington, said it is impossible to determine with certainty whether Haftar's LNA or NGA forces carried out the attack.

"There have a number of cases in which militias from Tripoli have attacked civilian targets and then later claimed the attacks had been carried out by the LNA, even though the targets were beyond the reach of LNA artillery," said Pusztai. That is why militias supporting the GNA in Tripoli act with the hope that the international community will force Haftar to retreat, he added.

Tunisian political analyst Mansour Oyouni agrees that attacking refugees would certainly not be in Haftar's best interest. "Both sides want to chase each other out of Tripoli and are prepared to do so by any means necessary," he said. "But right now, it is impossible to clearly blame one side or the other for the refugee camp attack."

And that is why the UNHCR and the International Organization for Migration are calling for an independent and comprehensive investigation into the attack. They say those responsible must be brought to justice. The organizations also noted that both sides know full well where such camps are located, and that civilians are living in them.

Sadly, refugee camps have a clear military value for the warring factions, said Pusztai. "It is a known fact that militias fighting for the al-Sarraj government recruit refugees from the camps as fighters," he explained. Arms depots are intentionally situated near the camps, for example, and refugees are also used as human shields at nearby military facilities, Pusztai added.

"In such instances, refugees are being intentionally misused by the side that supports the internationally backed government," Pusztai said, noting that is done to attract international attention and cast Haftar and the LNA in a bad light.

Read more: Niger's migrant smugglers use ever deadlier routes through the Sahara

Political scientist Oyouni believes there will be no solution for refugees in Libya until there is peace in the country. "Ultimately, they are the primary victims, and they are paying the price for the current situation," he said.

Could that force the European Union to reconsider its approach to the plight of refugees? "No," said Pusztai, "I don't think so." Though he added it may further complicate the practice of returning refugees and migrants rescued in the Mediterranean to Libya.

"Only a few camps are located in war zones, but those that are must be moved immediately," said Pusztai. "However, that would require the EU to change tack and negotiate with Haftar. That would be one way to protect the people from further attacks and save them from being recruited as militia fighters."

Emad Hassan and Jara Nagi contributed to this article.

Why has Pakistan not realized its economic and political potential?