A Turkish drone has been destroyed by forces loyal to Libyan warlord Khalifa Haftar near the country's only functioning civilian airport, his militia said. Turkey had previously threatened to attack the group. 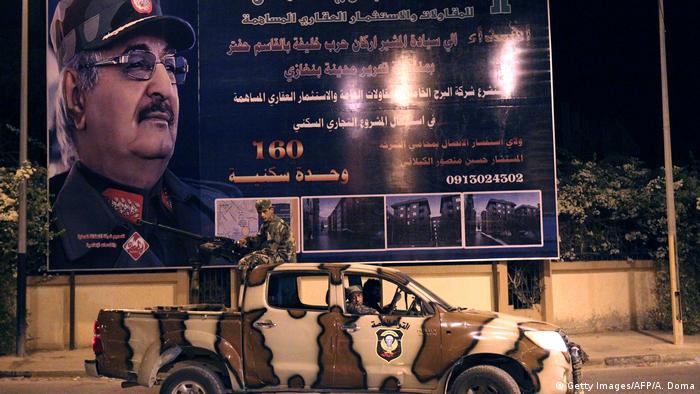 Haftar commands the loyalty of a coalition of soldiers, police officers, tribal militias and other groups

Libyan warlord Khalifa Haftar's Libyan National Army (LNA) on Sunday claimed it shot down a Turkish drone at an airport near Tripoli, amid escalating tensions Ankara and Tripoli.

The LNA also said the Mitiga airport, the only still functioning civilian airport in Libya, was targeted in an air strike. All flights were suspended "until further notice," airport officials said.

Earlier on Sunday, Turkey slammed Haftar's militia for detaining six Turkish nationals, describing it as "an act of thuggery and piracy." Turkish Foreign Ministry said Haftar's forces would "become legitimate targets" if the Turks were not released.

The 75-year-old Haftar was among the top military commanders in Libya until his falling out with late dictator Moammar Gadhafi in the late 1980s. He then became part of the CIA-backed opposition and returned to the country after Gadhafi's death in 2011. Haftar is currently allied with a parliament based in Tobruk, which is one of Libya's two competing governments.

While the military leader claims his goal is to purge the country of terrorists, his opponents claim he actually seeks to make himself a new strongman akin to Gadhafi.

In April, his forces launched an offensive to retake the capital, Tripoli, from troops loyal to the Government of National Accord (GNA). However, the attack has since stalled and Turkey's Recep Tayyip Erdogan recently admitted his country's was providing arms to the GNA.

On Friday, Haftar's LNA declared Turkish ships and aircrafts "legitimate targets" for its forces and announced a ban on flights to Turkey. Authorities allied with the military leader asked Turkish nationals to leave Libya, banned Turkish exports and barred all ministries, state institutions and banks from dealing with Turkish companies.

Earlier on Sunday, Turkish Defence Minister Hulusi Akar threatened retaliation "of the most effective and strongest kind" to any attacks against Turkey and its assets. This was followed by a separate statement from the Foreign Ministry proclaiming that six Turkish nationals were held captive by the LNA, and then Haftar's LNA claim of an air strike and shooting down of the Turkish drone.

Elsewhere, Turkish restaurants in Benghazi and other cities controlled by Haftar's LNA closed down or changed names for fear of reprisals. Two more Turks were detained on Sunday over their support for "militias" in Libya.