Opinion: Angela Merkel and Emmanuel Macron embody a two-speed EU | Europe | News and current affairs from around the continent | DW | 19.04.2018

Germany and France are the drivers of European Union integration. But Chancellor Angela Merkel could struggle if she tries keeping up with President Emmanuel Macron's breakneck reform agenda, says DW's Jens Thurau. 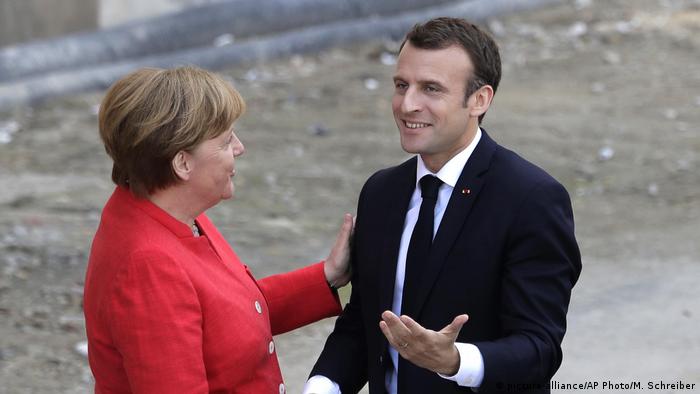 Angela Merkel and Emmanuel Macron couldn't be more different from each other. Merkel has not quite completed her political career but now, after more than 12 years in office, she finds herself eyeing the finish line. Macron, in turn, has only just begun his reign as French president and is full of energy. He wants wealthy Germany to show more solidarity with less well-off European Union countries, including France.

Merkel wants to lead the way

Since 2005, Merkel has steered her party on a decidedly centrist course, opting to phase out nuclear power and abolish compulsory military service. Her liberal open-door policy amid the influx of refugees almost to spit the EU in two, and she forced transition countries to adhere to a strict austerity program. Again and again, she has hinted that she wants one more term in office to solve the many problems that plague the EU today. Merkel wants to lead the way in this process, just like she has been used to.

But there is a problem. Macron has a concrete vision for a new and different Europe, while Merkel does not. And she would struggle to push through her vision, if she had one. Broadly speaking, Macron wants a kind of fiscal equalization system in which richer EU states support poorer ones. Macron's plan is facing fierce resistance from Merkel's conservative party, the Christian Democratic Union (CDU), and even Germany's Social Democratic Finance Minister Olaf Scholz, who has vowed to honor predecessor Wolfgang Schäuble's commitment to reign in German debt.

Not only that, Merkel also knows that members of the CDU, and its Bavarian sister party the Christian Social Union (CSU), have reservations about the EU. Merkel herself has always been more open to European reforms than her own party. In 2005, when German parliament voted on whether to grant Greece a third emergency loan, 63 conservatives voted against the proposal. These days, such a rebellion would spell the end of Merkel's coalition government. It's a situation like this that the power-conscious chancellor is keen to avoid. She also faces criticism from two opposition parties in parliament, the liberal Free Democrats (FDP) and far-right Alternative for Germany (AfD), both of which are highly EU-skeptical.

The center of power is shifting. Merkel needs to recognize that her influence is waning when it comes to Franco-German cooperation on EU affairs. There is also not a majority in German parliament that supports a genuinely new and progressive approach to the bloc, as Macron envisions. Nor would an increasingly EU-skeptical public back such a project. Now, Macron is increasing the pressure. He's been waiting — more or less patiently — for Berlin's take on his vision for the EU. Because up until just a few weeks ago, Merkel was too busy trying to establish a new government.

The future of EU policy-making, what ever it might bring, could well make Macron look like the bloc's new leader, with Merkel following, or forced to follow, behind him. Or perhaps refusing to do so. Merkel cares deeply about the future of the EU, so she will be very disappointed to lack the political power needed to move ahead. She has never looked this weak before. Maybe she is now paying the price for never having clearly explained to the German public what she plans for the EU. Now, it might just be too late.