Though Riyadh's price war may be aimed at Moscow, it is likely to inflict greater pain on the kingdom and its OPEC allies. DW looks at how likely the global oil producers, including the US, are to weather this crisis. 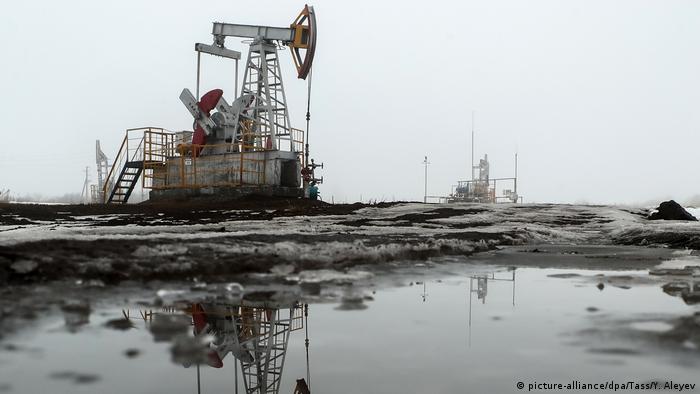 Saudi Arabia has raised the stakes by drastically lowering its export oil prices and pledging to raise output to record levels, setting the stage for a protracted price war, primarily aimed at Moscow. Russia — which last week refused to back Riyadh's plan for deeper oil cuts to stabilize the oil markets hurt by the coronavirus epidemic — has shot back, saying it, too, has the ability to raise output to record levels.

The price war, which on Monday led to oil prices registering their biggest drop since the 1991 Gulf War, would hurt all global oil producers, some more than the others. With several analysts projecting oil prices falling to $20 (€18) a barrel, exporters could suffer a prolonged period of pain.

The price war launched by the world's biggest oil exporter has perplexed many analysts, especially when they see how much Riyadh stands to lose from it. Saudi Arabia, which has the highest spare capacity globally and can produce oil at the lowest cost in the world, has launched price wars in the past but has always emerged from them bleeding.

The oil and gas sector accounts for about half of Saudi Arabia's GDP and nearly 70% of its exports earnings. The country requires oil prices to be around $84 a barrel to balance its budget, according to the IMF, and even a record oil production would not be able to compensate for the low crude prices.

Lower oil prices mean that the struggling economy will once again be forced to dive into its cash reserves to meet its budgetary needs as has been the case in the past few years. It is also likely to deal a blow to Crown Prince Mohammed bin Salman's ambitious spending plans as he looks to reduce the country's heavy reliance on oil. That's why some analysts feel Riyadh's decision to launch a price war may have been influenced by geopolitical interests.

The budget of the world's second-largest oil producer, nearly half of which comes from the energy sector, is more resilient to low oil prices than most major oil producers, but Monday's collapse has pushed oil prices below Russia's breakeven price of $42 a barrel. It's likely to hurt President Vladimir Putin's infrastructure and social spending plans, aimed at keeping him in power.

Much of Putin's projects are to be financed by a $150 billion wealth fund, amassed through surplus oil and gas revenues. If oil prices remain around $25-$30 a barrel, Russia — which does not have much spare capacity to compensate for the low oil prices — would be forced to dive into the wealth fund to finance its budgetary commitments, putting Putin's plans on the backburner. Russia has said the reserves are sufficient to withstand low prices for as long as 10 years. Riyadh is gambling that perhaps the Kremlin would not want to stall its spending plans, especially at a time when Putin's popularity ratings are low, and return to the negotiating table.

A protracted price war would be a nightmare for US shale producers, especially the smaller ones with weaker balance sheets, which have been struggling to stay afloat as low oil prices hurt their profits. US shale companies, many of which need oil prices to remain at $65 or higher to break even, will be forced to scale back operations, slash jobs and investments in exploration and production.

The latest price crash threatens to force dozens of debt-saddled producers into bankruptcy. The industry is unlikely to get any support from the Wall Street like it did during the previous oil price crash in 2015-16, when investors poured in billions into US shale companies. Investors have turned their backs on the US energy industry due to poor returns.

The fall in shale activity coupled with a record production by Saudi Arabia could dislodge the US as the world's biggest oil producer and mark the return of Riyadh to the top.

For Nigeria, the latest price war would revive memories of 2016 when low oil prices pushed its oil-dependent economy into a recession. Africa's biggest oil producer, which needs oil prices to be around $60 a barrel to balance its budget, is vulnerable to low oil prices as it depends on the commodity for 90% of its export earnings. The oil price shock would hurt its fragile economic recovery and push up inflation, already in double digits.

The oil rout could not have come at a worse time for Angola, Africa's second-largest oil producer, whose oil-heavy economy is already suffering from lower oil prices and production. The energy sector contributes about half of Angola's GDP and 90% of exports. Angola, which needs a breakeven oil price of around $60 a barrel, was hoping to emerge from an economic crisis caused by the 2016 price shock this year. That looks highly unlikely, if oil prices remain at current levels or fall further.

Benchmark global oil prices have dropped to a five-year low. Oil producing nations' economies are suffering. US and Saudi geopolitical goals are in play: both countries are interested in weakening Russia and Iran. (16.12.2014)