US President Barack Obama has released four more detainees from Guantanamo in one of his administration's last acts. Obama blamed Congress for blocking the facility's closure and endangering security. 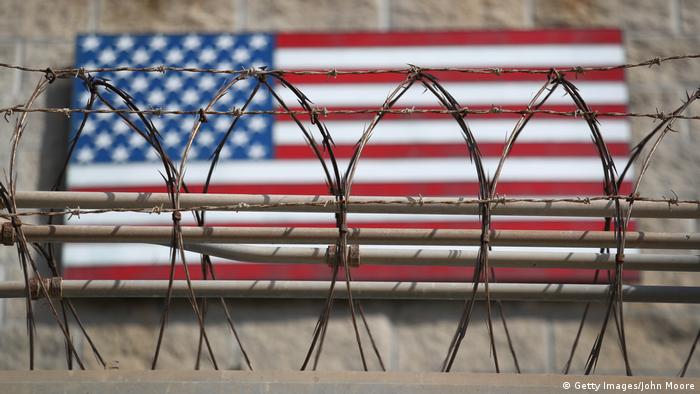 US President Barack Obama delivered a scathing criticism of Congress on his last day in office Thursday, blaming Republican lawmakers for blocking the closure of the military detention facility at Guantanamo Bay.

"Members of Congress who obstruct efforts to close the facility, given the stakes involved for our security, have abdicated their responsibility to the American people," Obama wrote in a two-page letter to Congress.

Obama pledged to close the military facility opened by the George W. Bush administration in 2002 to house terrorism suspects and issued an executive order shortly after taking office in 2009 ordering it to shut down. The move once had bipartisan support.

But the Obama administration ran into repeated resistance from the Republican-controlled Congress, which placed funding and legal restrictions on closing the facility. The Department of Defense, which clears prisoner releases from Guantanamo, has also been slow in finding third-countries to accept detainees.

Obama implemented a review process for detainees deemed safe to release, but Republicans and some Democrats voiced concern over recidivism.

The plan would have left some 26 prisoners considered too dangerous to release in indefinite detention without trial. Another 10 prisoners, including some suspected of involvement in the September 11 terror attacks, would also remain in prison pending military trial that would likely see them imprisoned for life.

Under the plan, all remaining inmates would have been transferred to prisons in the United States, something lawmakers said threatened national security and their constituents.

"No person has ever escaped one of our super-max or military prisons here, ever," Obama said. "There is simply no justification beyond politics for  Congress' insistence on keeping the facility open."

Obama said keeping Guantanamo open was costly, against American values and that it threatened national security.

"Terrorists use it for propaganda, its operations drain our military resources during a time of budget cuts, and it harms our partnerships with allies and countries whose cooperation we need against today's evolving terrorist threat," he wrote.

On Monday, the Defense Department announced 10 prisoners had been transfered to Oman.

Another five people have been cleared for release but US authorities failed to find a third country to take them.

That leaves 41 prisoners remaining at Guantanamo for the administration of Donald Trump, who on the campaign trail said he would "load it up with some bad dudes." On another occasion Trump suggested US citizens could be sent the military detention facility.

"History will cast a harsh judgment on this aspect of our fight against terrorism and those of us who fail to bring it to a responsible end," Obama wrote.

"Guantanamo is contrary to our values and undermines our standing in the world, and it is long past time to end this chapter in our history."

Guantanamo at 15: Doomed or resurrected?

President Bush opened it amid global protest, President Obama vowed to close it. After 15 years the Guantanamo Bay prison camp does not just remain open, it could even experience a revival under President Trump. (10.01.2017)