Pyongyang is sidelining the government in South Korea as it wants to be recognized as the equal of the US in order to force Washington into direct talks and, ultimately, a peace treaty. Julian Ryall reports. 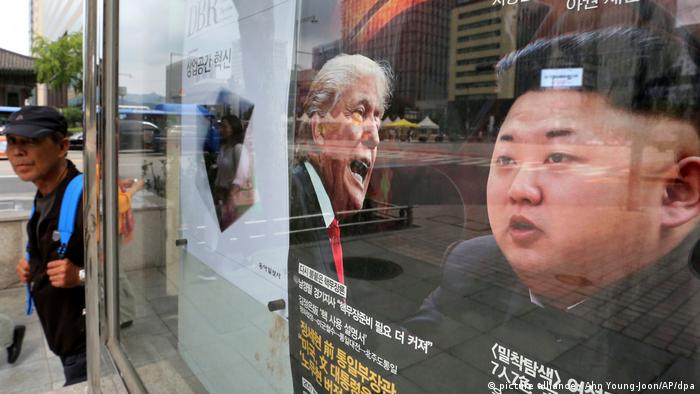 South Korean President Moon Jae-in on Tuesday called on North Korea to sit down for talks about the security situation on the peninsula in an effort to ease some of the tensions that divide the neighbors and have spread into the surrounding region.

The timing of Moon's request was significant, coming on the 10th anniversary of the final day of the second summit between North and South in Pyongyang in October 2007, when then-South Korean President Roh Moo-Hyun and the late North Korean leader, Kim Jong-il, released a joint declaration in which they pledged to seek a peace treaty and improve bilateral cooperation and exchanges.

Speaking in Seoul at an event to mark the anniversary, Moon emphasized that the opportunity to talk remains open to the North - and should be seized at a time of unprecedented anxiety.

"As I have stressed numerous times, the door to dialogue and negotiations is always open if North Korea stops making reckless choices," Moon said.

Pyongyang's response to this latest plea for diplomacy over military posturing was precisely the same as it has been to every other olive branch that Moon has extended since he was elected president in May: utter silence.

"For decades, the North's aim has been to conclude a peace treaty with the United States to supersede the armistice that was signed in 1953 to halt the Korean War," said Ahn Yin-hay, a professor of international relations at Korea University.

"They also want to be recognized as a nuclear power, to have parity with the US and other great powers and for the US to withdraw its forces from the Korean Peninsula," she told DW.

Through repeated nuclear tests - six to date - and 15 missile launches this year alone, the regime has now demonstrated that it does have a viable nuclear capability, and that has changed the equation, Ahn said.

"Kim Jong Un's era is completely different to that of his father," she said. "He knows how to negotiate and that the US is not going to use military force against him. So he is trying to force the US to negotiate directly with him. And as he considers South Korea to be an occupied state, he has no interest in negotiations with whoever is in Seoul."

In less than five months in power, Moon has proposed talks between representatives of the two nations' Red Cross organizations, between government officials on possible economic and humanitarian aid to the North, and among defense officials to help prevent an accidental clash on the border escalating into a far more serious incident.

All have been studiously ignored by Pyongyang.

Even efforts to engage the North on the PyeongChang Winter Olympic Games, which are scheduled to open in the South Korean mountain city on February 9, 2018, have come to naught. It is not clear whether North Korea will be sending athletes to the event.

"It is very clear that Pyongyang has no intention of opening a dialogue with the South at the moment, but the next few months should tell us more about their intentions as the Winter Olympics are coming up and there will need to be discussions on that," Daniel Pinkston, a professor of international relations at the Seoul campus of Troy University, told DW.

"They have two options; they can be confrontational towards the South and the rest of the world and try to disrupt the Games, or they can decide to participate, as they did in the Asian Games in 2014," Pinkston added.

"We will have to see whether they are willing to separate politics from sport, but Pyongyang does not see any benefit in talking to the South," he said. "That might be because the things that the South wants to talk about - denuclearization of the peninsula, humanitarian issues, the resumption of reunions of families kept apart since the end of the war - are issues that the North does not want to talk about."

There is also the possibility of loss of face before a domestic audience, Pinkston points out, something that Kim Jong Un would be determined to avoid.

"It is likely that if the North agreed to talks at this point that it would be perceived that they had been forced to the negotiating table due to the weight of international sanctions," he said. "Any attempt to discuss economic cooperation with the South could be seen as a signal of weakness that they are buckling under the weight of those sanctions, and Kim could not permit that to happen."

After more than four months of having his offers of detente ignored, it is clear that Moon has reached the conclusion that he is making no headway.

"Since he came to power, Moon has put all the emphasis on dialogue to improve the relationship with the North," said Ahn. "He had to at least try that approach because it was what he had promised in opposition. But he has made no progress."

"He gave another speech this week in which he said that now is not the right time to send a presidential envoy to the North, which some of the opposition parties have been suggesting, because nothing would come of it. I think he has realized that the only way forward now is more pressure."

- Merkel on North Korea: ‘We clearly disagree with the US president’