In a display of military strength, US bombers and fighter escorts have flown over North Korea. As the war of words ramped up, the move was designed to show Pyongyang that President Donald Trump means business. 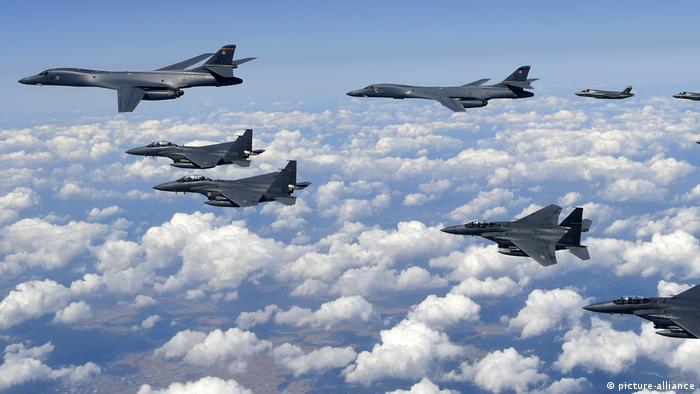 US warplanes during a September 18 drill over the Korean peninsula

The Pentagon said on Saturday that B-1B bombers from Guam and F-15 fighter escorts from Okinawa in Japan had flown a mission in international airspace over the waters east of North Korea.

The planes flew to the farthest point north of the border between North and South Korea by any such US aircraft this century, the Pentagon said, adding that the mission showed "how seriously President Donald Trump takes North Korea's reckless behavior."

"This mission is a demonstration of US resolve and a clear message that the president has many military options to defeat any threat," Defense Department spokeswoman Dana White said in a statement.

"North Korea's weapons program is a grave threat to the Asia-Pacific region and the entire international community. We are prepared to use the full range of military capabilities to defend the US homeland and our allies," White said.

North Korea's leader, Kim Jong Un, has said Trump would "pay dearly" for threatening to "totally destroy" North Korea if the US was forced to defend itself or its allies against an attack by Pyongyang.

Kim's foreign minister told reporters this past week that the North's response to Trump "could be the most powerful detonation of an H-bomb in the Pacific."

Late Saturday US time, President Trump once again took to Twitter to lash out at the North Korean regime. Trump again referred to Kim Jong Un as "rocket man" and said North Korea's Foreign Minister Ri Yong Ho and his boss "won't be around much longer," if Ri echoed the thoughts of "Little Rocket Man."

It was not clear from Trump's latest tweet if he was referring to Ri and Kim, or North Korea more broadly.

Trump was responding to Ri's speech at the United Nations General Assembly earlier on Saturday. Ri told the world body that targeting the U.S. mainland with its rockets was inevitable after "Mr. Evil President" Trump called Pyongyang's leader "rocket man".

Trump, in his maiden speech to the United Nations on Tuesday, had said that "Rocket man is on a suicide mission for himself and for his regime."

North Korea’s Foreign Minister Ri Yong Ho has called US President Donald Trump's speech to the UN "the sound of a dog barking." Trump had said the US may be forced to "totally destroy" North Korea. (21.09.2017)

Myanmar: Police crack down on protests as workers strike 1h ago