North Korean leader Kim Jong Un has called President Donald Trump "deranged" and said he will "pay dearly" for his threats. The North Korean Foreign Minister later reportedly threatened to test an H-bomb in the Pacific. 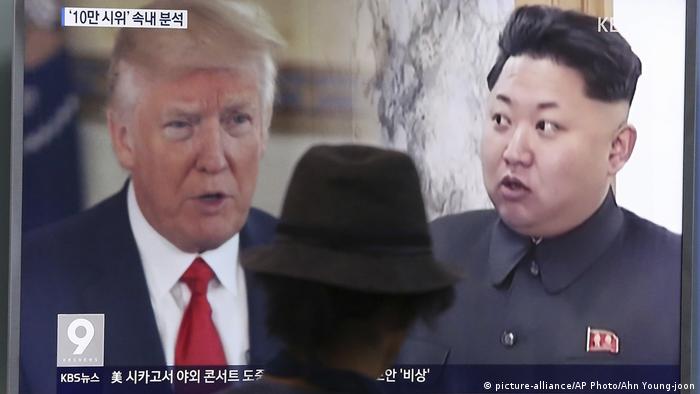 Kim said on Friday that Trump is "unfit to hold the prerogative of supreme command of a country" and described the president as "a rogue and a gangster fond of playing with fire," according to North's official Korean Central News Agency.

The comments come in response to Trump's speech at the UN General Assembly on Tuesday.

Calling Trump a "mentally deranged US dotard," Kim said that Trump's remarks had convinced him "that the path I chose is correct and that it is the one I have to follow to the last," adding that he was "thinking hard" about his response.

Not to be outdone in the personal insult back-and-forth, Trump, who called Kim "rocket man" during his speech at the United Nations, tweeted on Friday that Kim was a "madman."

"The exchange of threats is quite bad, unacceptable," he told reporters." We have to calm down the hot heads."

Lavrov added that he thought a Russian-Chinese proposal could still pave the way for a diplomatic solution to the North Korea crisis and warned that a collapse of a nuclear deal between Iran and world powers would only embolden Pyongyang.

South Korean media reported on Friday morning comments by North Korea's Foreign Minister Ri Yong that his country may test a hydrogen bomb to fulfill Kim's pledge to take the "highest-level" action against the United States.

Ri said on Thursday that a response "could be the most powerful detonation of an H-bomb in the Pacific."

"We have no idea about what actions could be taken as it will be ordered by leader Kim Jong Un," he said.

On Thursday, Trump had announced new US sanctions that he said "will cut off sources of revenue that fund North Korea's efforts to develop the deadliest weapons known to humankind."

He added that North Korea's textile, fishing, information technology, and manufacturing industries were among those the United States could target with the sanctions. The new measures do not affect the North Korean oil industry.

Read more: A closer look at which countries trade with North Korea

Citing anonymous sources, AFP and Reuters news agencies reported on Thursday that the European Union had reached an agreement on additional sanctions targeting North Korea, including a ban on investments and oil exports to the country.

Ambassadors from the 28-member states on Thursday "agreed on a package of new autonomous measures," an EU official told AFP, and they will now be prepared in detail to be approved by a meeting of European foreign ministers next month.

In an interview with DW, German Chancellor Angela Merkel said her government had a "clear disagreement with Trump over North Korea." She went on to offer to mediate between world powers and Pyongyang to reach a diplomatic solution to the crisis.

Trump praised China's central bank for what he said was a move to stop its banks from trading with North Korea. That development was reported by Reuters news agency on Thursday.

During his first speech at the United Nations General Assembly, Trump said the United States would "totally destroy" North Korea if forced to defend itself or its allies. For its part, North Korea called Trump's speech "the sound of a dog barking."

China has by far the most influence over North Korea, providing an economic lifeline, but fears the consequences if Kim Jong-Un's state collapses.

Seoul: Ease up on North Korea

Earlier on Thursday, Ban Ki-Moon called for an easing of tensions over North Korea, saying that the risk of accidental war was high.

"The situation surrounding the North Korean nuclear issue needs to be managed stably so that tensions will not become overly intensified or accidental military clashes will not destroy peace," Moon told the UN General Assembly.

South Korea approved a plan on Thursday to send $8 million (€ 6.7 million) worth of aid to North Korea, as China warned the crisis on the Korean peninsula was getting more serious by the day.

South Korea and North Korea are still technically at war as the 1950-1953 Korean War ended with a truce rather than a peace treaty.

Despite UN sanctions against North Korea, a number of African countries share a cosy trade relationship with the pariah state. Old alliances dating back to Cold War times have persisted - and remain important even today. (21.09.2017)