Merkel on North Korea: ‘We clearly disagree with the US president’

In an exclusive DW interview, German Chancellor Merkel criticized US President Trump for his remarks at the UN General Assembly.

“I am against threats of this kind. We consider any type of military solution absolutely inappropriate and we are counting on diplomatic efforts.” Merkel: “In my opinion sanctions and enforcing these sanctions are the right answer. But anything else with regard to North Korea I think is wrong. And that is why we [the German government] clearly disagree with the US president.”

Asked whether she would be willing to act as a mediator, Merkel said: “Even if this conflict is far away from Germany, it is one that also affects us. That is why I am prepared, as is the foreign minister, to assume responsibility here. We took part in negotiating the Iran agreement, which I think is good, and better than having no agreement at all. It took many years, but in the end it did limit Iran's possibilities for nuclear armament. And I think we must take the same path or a similar one, with Russia, with China, together with the US, also in the case of North Korea.“

On the integration of refugees

The chancellor said that many refugees “see German bureaucracy as being very slow and would like to be able to enter the labor market much faster. But we cannot allow that either. Because we cannot allow destructive competition. That perhaps Germans who are seeking employment cannot find certain jobs. We have to keep on finding a balance there.“ 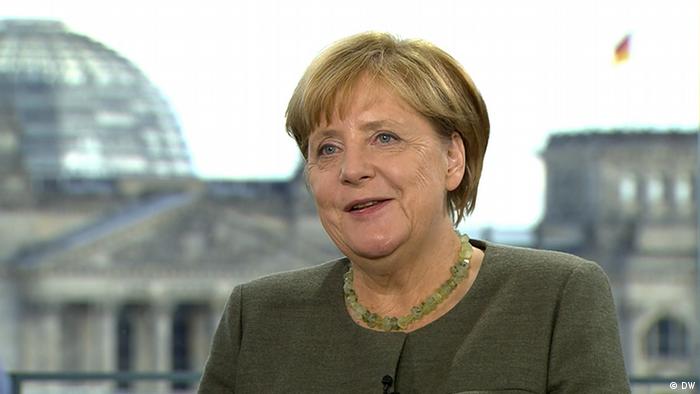 On working with the right-wing party AfD

“I will never work with AfD,” Merkel stated. Asked how she would win over far-right voters, she said: “My answer is clear: by solving people's problems. The worries they have, having their own jobs, as well as decent schools and doctors, to really take care of these issues, but on the other hand to signal a clear stop to hatred and violence.”

“Egypt needs our support. Through open dialogue we can perhaps slowly improve the situation,” Merkel said. She added that her government was sending out a very clear message to President al-Sisi about censorship of German political institutions or media such as Deutsche Welle.

No conflicts from Turkey

“We don't want to import any conflicts from Turkey to Germany,” the chancellor said, referring to Turkish people spying on or surveilling each other. She said her government would make sure that “all groups can live here peacefully and unharmed.”
Fear is not helpful

Merkel said she did worry about crises in Ukraine, Syria or North Korea but added that “fear is not at all helpful.“

“It’s been my experience that global cooperation can move mountains,” the chancellor said.

Ahead of the German elections on September 24, DW editor-in-chief Ines Pohl and presenter Jaafar Abdul Karim interviewed the top candidates of the national parties, putting the focus on German foreign policy. Chancellor Angela Merkel finished the series of interviews today.

German Chancellor Merkel stressed that the situation with North Korea must be resolved peacefully. She told DW that Germany could be in a position to mediate in the conflict. (20.09.2017)

SPD's Martin Schulz: Angela Merkel has no vision for the future

In an exclusive DW interview, Merkel's challenger criticized her campaign motto and lack of leadership. He was also highly critical of Turkish President Erdogan, saying he would not be blackmailed on refugee policy. (16.09.2017)

With only a few days to go until the German national election, Deutsche Welle provided insight into the campaign for its viewers around the world with a unique live TV debate. (14.09.2017)