Otto Warmbier, a student held in North Korea for over a year who died shortly after returning to the US, showed no obvious signs of torture, an Ohio coroner said. That contradicts what Warmbier's parents said they saw. 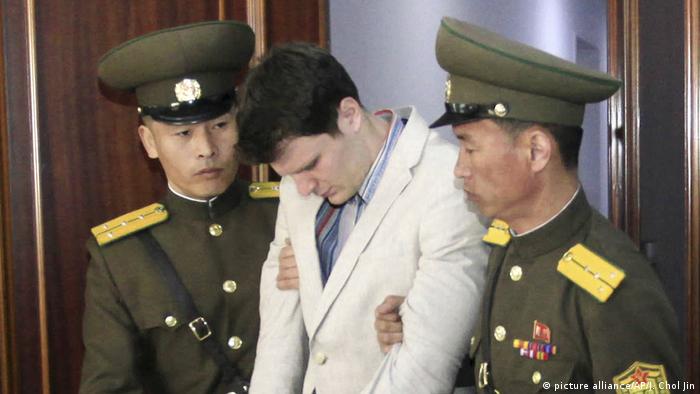 The precise cause of what led to Otto Warmbier's mysterious death may never be fully known, Ohio coroner Dr. Lakshmi Sammarco said on Wednesday, putting her account at odds with the Warmbier's parents.

The coroner's report, dated September 11, states that the cause of Warmbier's death was due to complications from brain-damaging oxygen deprivation through "an unknown insult more than a year prior to death."

Read more: US to ban Americans from visiting North Korea

"We don't know what happened to him, and this is the bottom line," Sammarco said, adding that none of the uncovered evidence had led to any "scientific facts" around the 22-year-old student's mysterious death.

Warmbier was sentenced to 15 years of hard labor in North Korea for allegedly attempting to steal a propaganda poster. Pyongyang officials claim that he fell into a coma while in detention due to botulism and a sleeping pill.

Pyongyang has insisted that Warmbier was not tortured while in North Korea.

"Trump and his clique, for their anti-DPRK propaganda, are again exploiting the death of Otto Warmbier, an American college student who had been under reform through labor for the criminal act he committed against the DPRK and died after returning to the U.S," it said, using the acronym for the North's official name.

Following a series of negotiations, US officials successfully secured Warmbier's release in July 2017, flying him back home to Cincinnati via air ambulance. However, upon landing back in the US, reports emerged that the student was in a deep coma, and had been for more than year. He died less than a week later.

Sammarco said she was compelled to publically disclose her findings on Wednesday after Warmbier's parents gave an interview to US broadcaster Fox News in which they reported their son had suffered extensive torture.

Fred and Cindy said their son's body had showed obvious signs of torture, including disfigured hands and feet, and teeth that had been "rearranged."

"They kidnapped Otto, they tortured him, they intentionally injured him. They are not victims, they are terrorists," father Fred Warmbier said.

However, Sammarco said Warmbier's body was in particularly good condition for someone who had been bed-ridden for over a year. The coroner reported some scars and bruises, which she said appeared to stem from medical procedures.

Asked what she made of the parents' comments, Sammarco said "they're grieving parents. I can't really make comments on their perceptions."