Japan has condemned Pyongyang's latest launch, which landed off its coast, saying the missile posed a threat to airplanes and ships. US President Donald Trump said the test showed "great disrespect" to China.

The projectile, launched early on Monday local time, is believed to have traveled around 450 kilometers (280 miles) before falling into the Sea of Japan. The US Pacific Command said the short-range Scud-class ballistic missile was tracked for six minutes before it disappeared.

According to South Korea's Joint Chiefs of Staff, the launch came from the North's coastal town of Wonsan, some 200 kilometers east of the capital Pyongyang. 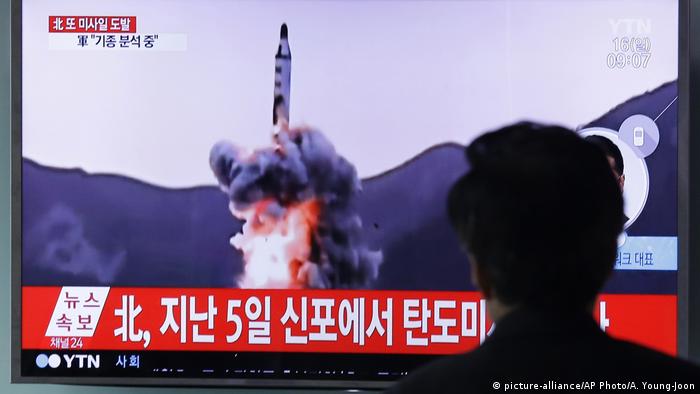 File footage of a missile test in April

While Japan strongly condemned the launch, warning that the missile posed a major risk to airplanes and ships in the area, a government spokesperson said it had received no reports of damage.

Japanese Prime Minister Shinzo Abe vowed to take "concrete action" with the US against North Korea following what is believed to be the 12th ballistic missile launch this year.

"We will never tolerate North Korea's continued provocations that ignore repeated warnings by the international community," he told reporters on Monday.

Meanwhile, Chief Cabinet Secretary Yoshihide Suga said in televised remarks that "this ballistic missile launch by North Korea is highly problematic from the perspective of the safety of shipping and air traffic and is a clear violation of United Nations Security Council resolutions."

At the weekend,the Group of Seven (G7) leaders agreed to adopt common language on North Korea following its latest series of ballistic missile tests, as the reclusive state seeks to ramp up its weapons program and develop nuclear-tipped missiles capable of reaching the US mainland.

A declaration published by the G7 leaders in Sicily said that Pyongyang poses an increasing threat of a "grave nature" to international peace and stability, while all states pledged to strengthen measures unless the North agreed to abandon its nuclear program.

US President Donald Trump tweeted later on Monday that Pyongyang had "shown great disrespect for their neighbor, China, by shooting off yet another ballistic missile."

Trump has sought tougher sanctions against the North, having warned last month that a "major, major conflict" with the isolated state was possible.

However, both the US and North Korea have recently made comments suggesting that a meeting between the two sides could still be possible in the "right" circumstances.

South Korea's Moon had signaled a more flexible approach to dealing with Kim Jong Un's regime in the North, having restarted stalled civilian aid and exchange programs. However, analysts don't believe that the new president will push for a major rapprochement, saying Pyongyang has gone too far with its nuclear ambitions.

While it is widely believed that the North is able to arm its shorter-range missile with nuclear warheads, the precise extent of its weapons program remains unknown.

North Korea has confirmed the launch of a missile to test the reliability of the late-stage guidance of a nuclear warhead. Leader Kim Jong Un supervised the test of the missile fired from a mobile launcher. (21.05.2017)