The new South Korean leader, Moon Jae-in, has promised to try to engage the cloistered regime in Pyongyang, but few believe that North Korea will reciprocate or abandon its nuclear weapons. Julian Ryall reports. 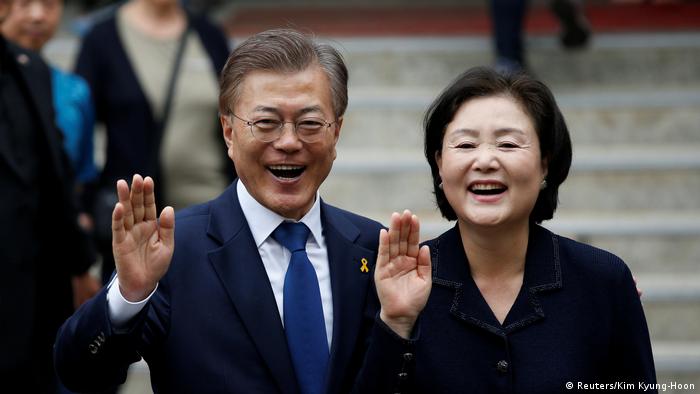 Moon Jae-in, the newly elected South Korean president, has wasted no time in laying out his plan for a closer and more cooperative relationship with the secluded leadership in Pyongyang.

Since taking office on Wednesday, he has even gone as far as stating that he would be willing to travel to North Korea to discuss Kim Jong Un's contentious nuclear and missile programs.

Analysts say that while Moon may be reaching out to a neighbor that has repeatedly declared that it wishes to turn the South into "a sea of fire," he is sufficiently politically astute to realize that he is unlikely to make any meaningful headway in the bilateral relationship.

North Korea crisis - Which country has the strongest military in the region?

Tensions continue to run high on the Korean Peninsula due to North Korea's bellicose posture and increased nervousness among its neighbors. DW takes a look at the military strengths of the main players in the region. (11.05.2017)

The presidents of China and South Korea have agreed they want North Korea to move away from its agenda of atomic antagonism. A US missile-defense system deployed on the peninsula was also a topic of conversation. (11.05.2017)

South Korea's new President Moon Jae-in will look to fundamentally alter the country's policy toward North Korea and the US. On the domestic front, too, he has to initiate reforms, says DW's Alexander Freund. (10.05.2017)

But he has to try, even if that causes concern among some of Seoul's traditional allies.

"I will quickly move to solve the crisis in national security," Moon said in his maiden speech in the National Assembly as president. "I am willing to go anywhere for the peace of the Korean Peninsula. If needed, I will fly immediately to Washington. I will go to Beijing and I will go to Tokyo. If the conditions shape up, I will go to Pyongyang."

His proposals, however, fall well short of the "Sunshine Policy" introduced by President Kim Dae-jung in 1998. The attempt to engage North Korea earned the then South Korean leader the Nobel Peace Prize in 2000 and had a number of high points - including two inter-Korean summits in Pyongyang, in June 2000 and again in October 2007, and reunions of families separated since the end of the 1950-53 Korean War.

But it quickly unraveled when North Korea conducted its first underground nuclear test in October 2006, followed by a series of missile tests.

"It has been a constant theme of Moon's campaign, that he would explore the possibility of contact and engagement with the North," said Rah Jong-yil, a former South Korean ambassador to both London and Tokyo.

"And while this is positive, the problem is that such an approach could put South Korea into conflict with the international sanctions that have been imposed on the North as the US and China try to exert sufficient pressure on the regime for it to give up its nuclear weapons and ballistic missile program," he told DW.

North Korean state media has made no mention of Moon's election victory, even though it is widely assumed that Pyongyang would have preferred a liberal in the presidential Blue House in Seoul who calls for engagement over confrontation. Indeed, there are few signs of North Korea easing up on the propaganda and rhetoric, with the state-run Korean Central News Agency describing the South as a "puppet group of traitors" and "terrorist maniacs" on Moon's inauguration day.

Rah believes there is little reason to be optimistic that bilateral relations will suddenly improve under Moon. There is, he said, simply little trust in the North.

"The people of South Korea have become hardened by their experiences of North Korea," he stressed. "We see the reality of the regime there and it is hard to believe there could be genuine reconciliation because of the vast differences that divide us."

Stephen Nagy, a senior associate professor of international relations at Tokyo's International Christian University, agrees that any attempt to resuscitate a form of the Sunshine Policy will fail.

"Moon has been populist in his appeal in the run-up to the election and sure, South Korean people would like reconciliation and even reunification, but the reality - and they know it - is that is just not realistic.

"North Korea has significantly strengthened its military over a decade ago and, at the same time, improved its economy," he said.

And since it developed what appears to be a credible nuclear weapon, the regime has repeatedly declared that its nuclear program is not open to discussion.

"The South has 60 years' experience of the North's constant adversarial stance, its violent agenda - such as the sinking in 2010 of the corvette Cheonan and the shelling of Yeonpyeong Island a few months later - and its track record of going back on agreements," Nagy pointed out. "No-one in the South would be naive enough to trust what the leadership in Pyongyang promises."

Nevertheless, Moon's apparent olive branch to the North has rattled some in the region already. In an editorial on the day that Moon took over the leadership in Seoul, the conservative Yomiuri Shimbun in Tokyo asked whether he would "stick to a pro-North, anti-Japanese stance?"

That concern was elevated the following day, when it was reported that Moon was considering scrapping an agreement reached in 2015 between Seoul and Tokyo to compensate women forced into sexual slavery for the Japanese military before and during World War II and finally draw a line under the long-running discord. "There are strong complaints in Japan that South Korea 'moves the goalposts,'" the Yomiuri reported.

Nagy dismisses the suggestion that the new South Korean leader is prioritizing the North over Japan. "Moon has decided to put the 'comfort women' issue into a peripheral space in the political relationship with Japan and he does not want that to become the identifying feature of the relationship," he said. "He recognizes that it is very important for the two nations to work together, to have a good relationship and to put up a unified front in order to deal with North Korea."