The UN Security Council has accused North Korea of "flagrant and provocative defiance" after its latest missile launch on Sunday. Pyongyang has fired eight missiles so far this year despite international condemnation. 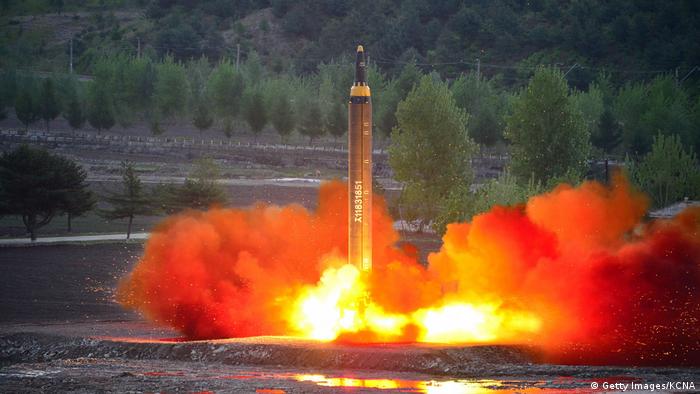 The United Nations Security Council said Monday it would impose additional sanctions on North Korea in response to Pyongyang's latest launch of a ballistic missile at the weekend.

All 15 council members, including the North's closest ally China, approved the statement which accused the North of "destabilizing behavior and flagrant and provocative defiance."

Council members vowed to "fully and comprehensively" implement the six rounds of sanctions the UN's most powerful body has already imposed against North Korea, and vowed a stepped-up response.

To reduce tensions on the Korean peninsula, the council demanded that Pyongyang halt its nuclear and missile tests.

Sunday's missile was fired from a location near the city of Pukchang, north of the capital, and soared some 500 kilometers (around 300 miles) before falling into the Sea of Japan, South Korea's military said.

The launch was the second in just over a week, and the eighth since the start of the year. Pyongyang carried out two atomic tests and dozens of missile launches last year, which led to two UN sanctions resolutions.

After last week's launch, US Ambassador to the UN Nikki Haley said she was going to "tighten the screws" on Pyongyang.

In spite of international sanctions on North Korea's communist regime, Russia has been increasing fuel exports to Pyongyang and filling in the supply gap created by China halting trade. Julian Ryall reports. (17.05.2017)

Amid the recent tensions in the Korean Peninsula, DW takes a look at the defector reality TV shows that are providing a rare opportunity for South Koreans to learn more about life for their counterparts in the North. (17.05.2017)

Last week, North Korea repeated a vow to strengthen its nuclear strike capability as long as the US maintains its "hostile policy" toward the country.

On Monday, the North's state news agency, KCNA, said the latest test was supervised by leader Kim Jong Un and verified the reliability of Pukguksong-2's solid-fuel engine, stage separation and late-stage guidance for a nuclear warhead.

KCNA said the North was ready to start mass-producing the new medium-range ballistic missile, which it said is capable of reaching Japan and major American military bases.