Nord Stream 2: Last piece of gas pipeline is in place 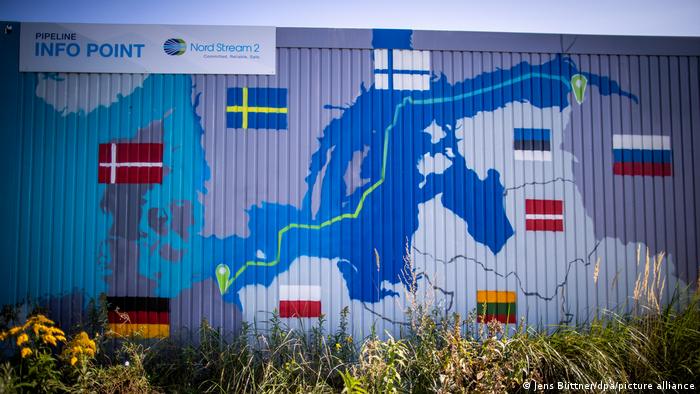 Nord Stream 2 bypasses Ukraine and the Baltic states, as well as Poland, to deliver natural gas to Germany

According to the company, the final piece of piping has been welded together. It will then be lowered into place in the Baltic Sea. It must then be connected and will then be expected to begin operating.

Why is Nord Stream 2 controversial?

Russia's state-owned energy company Gazprom said once the project has been completed the pipeline will begin supplying Germany in October. The €10 billion ($12 billion) project is expected to double the carrying capacity to Germany.

The construction of the pipeline has been dogged by delays and should have been completed by December 2019.

Its construction has been a sore point in Washington, with US sanctions ultimately delaying the final delivery of the project.

The US is not happy with what it believes will be a more dependent relationship between Europe and Russia. Washington does not want Moscow using energy as a weapon, and has sought assurances from Berlin that it will act if that is seen to be the case.

Role of Ukraine in Nord Stream 2

Kyiv has been opposed to the project because of a bypass which prevents the routing of the pipeline through Ukraine. This bypass will deprive the country out of billions in transit fees. President Volodymyr Zelenskyy has said the project is a "dangerous geopolitical weapon."

"We view this project exclusively through the prism of security and consider it a dangerous geopolitical weapon of the Kremlin," Zelenskyy said at the time.

Those comments were made last month when German Chancellor Angela Merkel visited the country, fresh from her last meeting with Russian President Vladimir Putin.