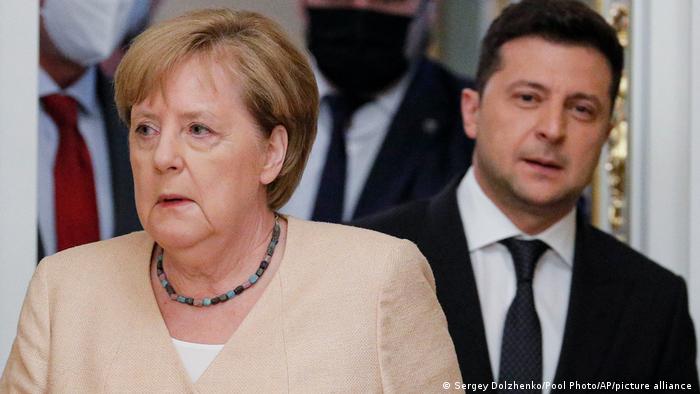 Ukraine is opposed to the Nord Stream 2 gas pipeline, which runs from Russia to Germany

Zelenskyy was speaking at a joint press conference in Kyiv with German Chancellor Angela Merkel, who has spearheaded the pipeline fiercely opposed by Russian neighbors Ukraine, Poland and the Baltic states.

"We view this project exclusively through the prism of security and consider it a dangerous geopolitical weapon of the Kremlin," Zelenskyy said.

He added that the main risks will be "borne by Ukraine" but that the pipeline will also be dangerous "for all of Europe" as it will "play into the hands of the Russian Federation," he said. 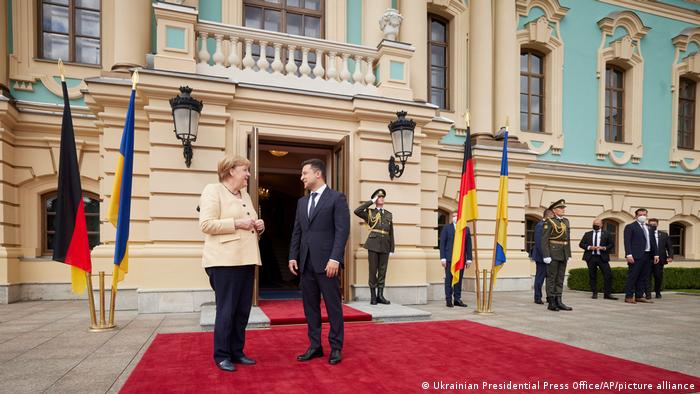 Ukraine is opposed to the Nord Stream 2 gas pipeline

Merkel is making her last visit to the Ukraine capital before retiring next month as chancellor. Her trip to Kyiv comes two days after she met with Russian President Vladimir Putin.

The chancellor said Berlin agrees with Washington that "gas must not be used as a geopolitical weapon."

"It will come down to if there is an extension to the transit contract via Ukraine — the sooner the better," she said.

Merkel added that negotiations to expand the gas transit agreement are getting underway.

She called for a new summit between Germany, Ukraine, Russia and France.

Moscow's current agreement with Kyiv runs out in 2024 and the lack of transit fees would likely cause significant economic problems for Ukraine.

Germany had made commitments to support Ukraine to renew its energy mix and will support the development of renewable projects with a total of €1 billion ($1.2 billion) via bilateral projects.

What else was discussed?

The two leaders also discussed the ongoing conflict in eastern Ukraine with Russian-backed separatists. The occupied regions of Donetsk and Luhansk are of key interest, as well as the faltering Minsk agreement which was meant to deescalate tensions.

Merkel said she still supported mediation efforts between Kyiv and Moscow which are being led by Berlin and Paris, because ultimately they allowed for dialogue.

"Without that, we'd have no contact whatsoever," she said. But Merkel did concede that results to date were not satisfactory, due to Russia's role in the conflict. "Therefore, we're in a situation where the talks are going in circles."

While Zelenskyy supported the idea of a meeting he called for Western allies to tighten the screw on Russia.

"As long as there is no progress, the pressure on Russia should continue. We want to see active efforts of our Western partners,'' Zelenskyy said.

Germany has been a vital ally for Ukraine since Moscow annexed the Crimean peninsula in 2014.

But the German chancellor has frustrated Ukrainian authorities by opposing sending arms to Kyiv. 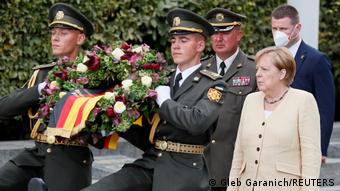 This year marks the 80th anniversary of the German Nazi invasion of the Soviet Union and with it, Ukraine

The chancellor laid a wreath at the grave of the unknown soldier.

Germany invaded the Soviet Union, of which Ukraine was then a part, 80 years ago under the National Socialist regime.