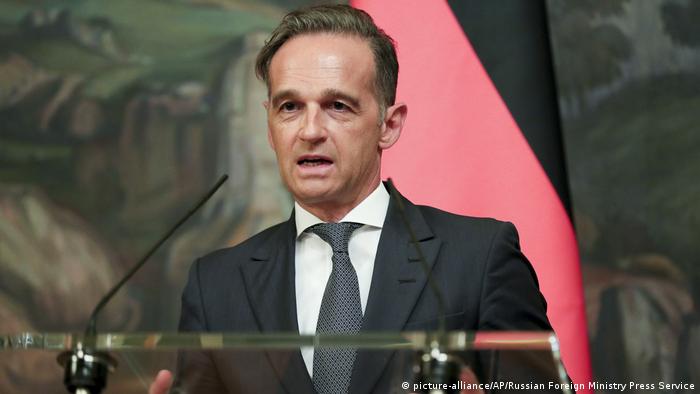 German Foreign Minister Heiko Maas speaks during a news conference in Moscow. Maas believes Germany and Russia can have a better relationship if they engage in dialogue.

German Foreign Minister Heiko Maas on Sunday rejected calls for harsher sanctions against Russia over the Kremlin's treatment of opposition leader Alexei Navalny and the recent Russian military buildup on the Ukrainian border.

Maas characterized the current German-Russian relationship as "very bad" during an interview with public broadcaster ARD, but added it "doesn't have to stay that way."

He said the German government should engage in more dialogue with Moscow, and added it is the "essence of diplomacy"  to talk with countries that have opposing viewpoints.

"This is especially true for Russia right now," Maas said.

At the same time, Maas said German sanctions against Russia over its 2014 annexation of Crimea will continue until there is a political solution.

In regards to jailed Kremlin critic Navalny, Maas said he believes tougher sanctions would be counterproductive in getting the Kremlin  to release the opposition leader or improve his situation.

"Do you think Moscow will say 'thank you very much for imposing even tougher sanctions?'" Maas said. "I don't think so, I think the opposite would be the case," he added.

The German foreign minister noted that President Joe Biden has already threatened consequences for Russia if Navalny dies while in custody.

"I believe President Putin knows exactly what to expect if it would get that far," Maas said, while refusing to respond to whether he agrees with Biden's characterization of Russian President Vladimir Putin as a "killer."

What is Navalny's condition?

Navalny, one of Putin's most outspoken critics, is currently being held at a prison camp northeast of Moscow.

He was sentenced to two-and-half years in prison in early February after being arrested upon return to Russia from Germany, where he was recovering from a nerve agent poisoning. The EU has demanded Navalny's release, while issuing sanctions against Russian entities and individuals over the poisoning.

Navalny's private doctors have not been allowed to see him while in prison, with the Kremlin critic complaining of various ailments such as back pain and numbness in his legs

Navalny ended a hunger strike  in captivity last week after he began to reject food and water on March 31 to demand better medical care.

Heiko Maas: 'The US is using very clear language with a view to Russian activities'

The Greens chancellor candidate for the upcoming federal elections has said she wants a tougher stance from Germany to address Russian aggression in Ukraine and China's global ambitions.