Russia orders soldiers back from Ukraine border after weeks of tension

The move could end weeks of geopolitical tension caused by a massive buildup of troops and weaponry at the Ukraine border. NATO and Kyiv have welcomed the pullback. 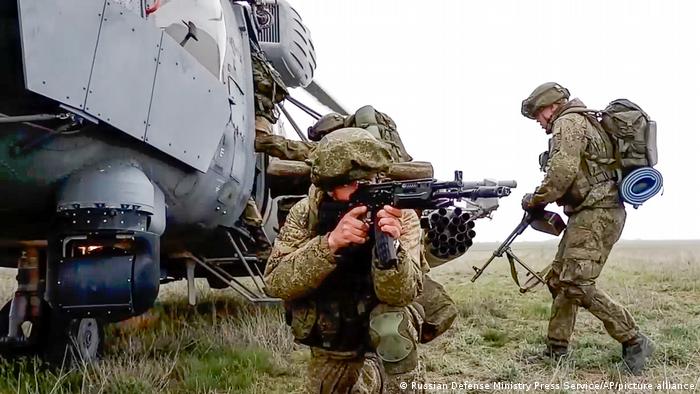 The Russian defense minister on Thursday ordered troops taking part in military drills near the Ukrainian border to return to their regular positions.

The move could end weeks of tension caused by a buildup of troops and weaponry at the Ukraine border.

"I believe that the goals of the snap check have been fully achieved. The troops have demonstrated their ability to provide a reliable defense of the country. In this regard, I have decided to complete the inspections in the Southern and Western military districts," Defense Minister Sergey Shoigu said in Crimea, the peninsula Moscow annexed from Ukraine in 2014.

"Ukraine is always vigilant, yet welcomes any steps to decrease the military presence and de-escalate the situation in Donbas. Ukraine seeks peace," Zelenskyy wrote on Twitter, adding that he was "grateful to international partners for their support."

Tensions with the West

The buildup of tens of thousands of Russian troops near the border, as well as a recent uptick in fighting between pro-Moscow separatists and Ukrainian forces in eastern Ukraine, led Western countries to voice alarm.

Following the pullback announcement, NATO said it would continue to closely monitor the situation.

"Any steps towards de-escalation by Russia would be important and well overdue. NATO remains vigilant," a NATO official said in a statement. "We continue to call on Russia to respect its international commitments and withdraw all its forces from Ukrainian territory."

According to the European Union, about 100,000 troops were at the border.

Moscow, however, has rejected concerns about the buildup, saying it is free to deploy its forces anywhere on Russian territory.

Russia: Military must be prepared

Shoigu said that the military taking part in the drills should return to their bases by May 1. However, he also ordered that heavy weapons be kept in place about 160 kilometers (100 miles) east of the border for another military exercise later this year.

The drills are a new US-led, multinational joint exercise between US and other international forces launched in 2020, and expanded for 2021.

"NATO military activity is significantly increasing in this region," Shoigu said, adding that Russian troops would be on alert in case of "unfavorable development" of the Western exercises. 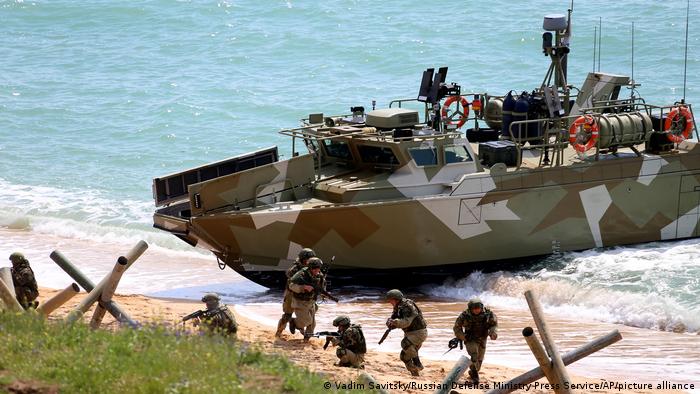 Meanwhile, Russian President Vladimir Putin said Zelenskyy was welcome in Moscow to discuss bilateral relations "any time that is convenient for him."

The offer came after Zelenskyy invited the Russian leader to meet him for talks in Ukraine's war-ravaged east. However, Putin said Zelenskyy should first have talks directly with the separatists if he hoped to end the conflict.

Earlier in the week, Ukrainian Foreign Minister Dmytro Kuleba warned that the buildup was continuing and was "expected to reach a combined force of over 120,000 troops."

Germany's Norbert Röttgen, chairman of the foreign affairs committee in the Bundestag earlier called for further action from the European Union.

The premier of the German state of Saxony was in Moscow on Thursday and spoke with Russian President Putin on the phone. Of chief concern was the potential procurement of Sputnik V coronavirus vaccines, however they did discuss the conflict in Ukraine.

'Everyone here in Mariupol has a suitcase packed'