Saxony state Premier Michael Kretschmer said the purchases were pending EMA approval. He was in Moscow on Thursday for talks with the health minister and Vladimir Putin. 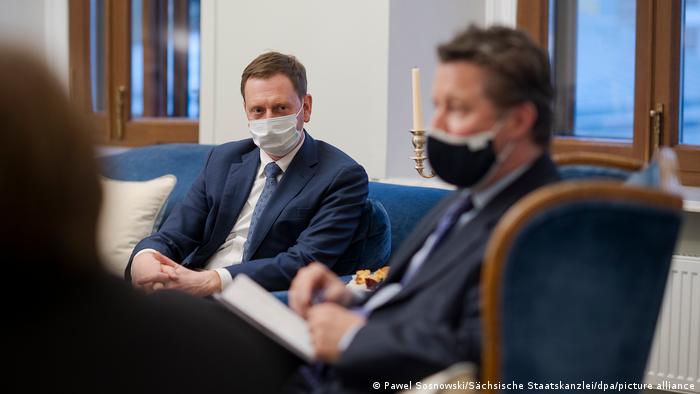 Kretschmer's comments followed talks with Russian Health Minister Mikhail Murashko. He said it would be a success if that were to happen in May, but that officials are eyeing June, July and August as the months to distribute the bulk of the doses.

"We want to buy 10 million doses three times — in June, July and in August — Sputnik V," the CDU politician said.

"The prerequisite is the approval with the European Medicines Agency (EMA)," he said, adding that the EMA approval forms the necessary basis of trust.

Health Minister Jens Spahn said earlier this month that Germany was negotiating with Russia over an advance purchase agreement of the vaccine after some states such as Bavaria and Mecklenburg-Western Pomerania had negotiated independently with the vaccine manufacturer.

EMA to start review in May

The World Health Organization (WHO) also announced on Thursday, that, together with the EMA, it will begin the next round of review for Sputnik V on May 10. An EMA delegation is currently in Moscow.

Kretschmer said that he believed the Russian vaccine would be well received in the eastern state of Saxony. If the Sputnik V deal was successful, Saxony, with a population of 4 million, would receive 500,000 doses in each of the three months, he said.

The announcement came as the European Commission works on legal proceedings against AstraZeneca after the drugmaker cut vaccine deliveries to the European Union.

However, Kretschmer, 45, himself plans to be vaccinated with the AstraZeneca shot, in order to deliberately show that the vaccines are safe. Germany's vaccination commission currently only recommends the vaccine for routine use on people aged 60 and over, but it is still possible for younger people to get the shot if they have a doctor's permission.

The state premier also spoke by phone with President Vladimir Putin during his visit on Thursday.