Angela Merkel gets her AstraZeneca COVID vaccine shot | Germany | News and in-depth reporting from Berlin and beyond | DW | 16.04.2021 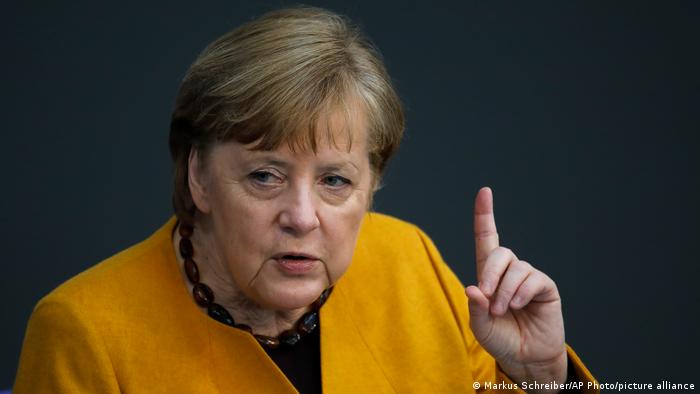 Merkel always said she would wait her turn before getting vaccinated

Unlike many other world leaders, German Chancellor Angela Merkel has not made much of a fuss about the fact that she has now been vaccinated with the AstraZeneca vaccine, made by a British-Swedish manufacturer.

The 66-year-old chancellor received the vaccine at the specially installed center in Berlin's former Tempelhof Airport, which is currently working exclusively with AstraZeneca, a vaccine that is only available to the over-60s in Germany, because of a marginal risk of blood clots. Around 3,000 people a day can currently receive a vaccination there.

The vaccination was announced by her spokesman Steffen Seibert in a post on Twitter, with a simple photo showing her only her vaccination certificate.

Merkel said: "I am delighted to have received my first vaccination today with AstraZeneca. I thank everyone who is involved in the vaccination campaign — and everyone who gets vaccinated. Vaccination is the key to overcoming the pandemic."

Several times in recent weeks, the chancellor had been forced to answer the question of when she would be getting herself injected, and whether she would be taking AstraZeneca. Her response was always the same: "When it's my turn, I'll get vaccinated, including with AstraZeneca." She clearly knows what a sensitive issue the vaccination queue is, especially in Germany.

Politicians in Germany have taken pains to avoid coming across as queue-jumpers, even if there's no reason why they shouldn't be allowed it — as in the case of the chancellor.

German President Frank-Walter Steinmeier also avoided fanfare when he was vaccinated at the beginning of April at a military hospital in Berlin: His office merely issued a photo and a press release, which confirmed that he too had been given the AstraZeneca.

"I trust the vaccines approved in Germany," the 65-year-old Steinmeier was quoted as saying. "Vaccination is a decisive step on the way out of the pandemic. Take advantage of the opportunities, join in."

In Baden-Württemberg's 72-year-old Premier Winfried Kretschmann, of the Green Party,  is so far one of the few German politicians who allowed TV cameras to be used when he was vaccinated in March. He also received the AstraZeneca vaccine and hastened to add that he had confidence in its effectiveness.

AstraZeneca now only for people over 60

Initially, the vaccine from the British-Swedish manufacturer AstraZeneca had only been approved for people under 60 because there was not enough data available for older people in the trials.

But then, a few disturbing reports of isolated incidents of brain thrombosis in vaccinated people, especially among younger women, emerged, and now AstraZeneca is only dispensed to people over the age of 60.

In this context, the chancellor's vaccination was meant as a signal that she continues to back this vaccine despite uncertainties.

At the same time, she is well aware of how quickly debates can arise about whether politicians are using their influence to secure privileges. At the start of the vaccination campaign in December 2020, there were reports of some local politicians who had a vaccine administered ahead of schedule. Bernd Wiegand, mayor of the city of Halle in Saxony-Anhalt, for example, found himself suspended from office after he had himself vaccinated prematurely.

In other countries, political leaders are much more demonstrative about their own vaccination than Merkel. British Prime Minister Boris Johnson had himself vaccinated in March to great media attention, after a spell in hospital with COVID-19 last year.

And new US President Joe Biden, 78, wasn't even in office when he got his COVID vaccination in front of rolling cameras at a hospital in the state of Delaware in December 2020 — though he declined the offer to count to three before the needle of the syringe entered his upper arm.

Earlier on Friday, Merkel pleaded with lawmakers to back her in implementing coronavirus lockdowns and curfews on areas with high infection rates.

"The third wave of the pandemic has our country firmly in its grip," Merkel said, whose speech was heckled by lawmakers from the far-right Alternative for Germany (AfD) party. The AfD have maintained an anti-lockdown stance throughout the pandemic.

But Merkel said: "Intensive care workers are sending one distress call after the other. Who are we to ignore their pleas?"