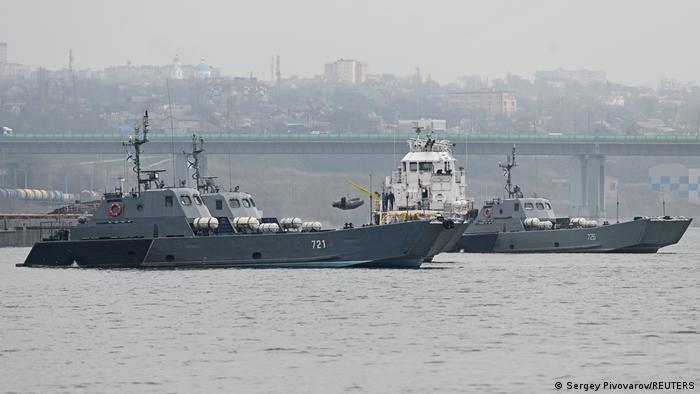 Russia sent 15 warships to the Black Sea for a maneuver on Saturday amid escalating tension with Ukraine and the West.

The reinforcement comes as Ukraine accuses the Kremlin of a massive buildup of Russian troops on its borders, which Moscow has called a temporary defensive exercise.

The ships passed through the Kerch Strait off the Crimean Peninsula, the navy told Russian Interfax news agency.

The Russian Defense Ministry announced on Friday that some sea areas off the Crimean Peninsula would be temporarily closed off to foreign warships because of the maneuvers. But shipping in the strait was not affected, it said.

But a Reuters reporter said a ship carrying logistics trucks and equipment for NATO forces in Romania transited the Bosporus on Friday evening, signaling further heightened tensions in the region.

The United States recently canceled the deployment of two warships to the Black Sea following complaints from Russia.

Pressure mounts on the Kremlin

Western powers have backed Ukraine, with the European Union, US and NATO slamming Russia's recent actions in the region.

But the Kremlin has argued that it is entitled to move Russian troops wherever it pleases within its territories.

The escalation also comes as relations worsen between Moscow and Washington with fresh sanctions.

For nearly seven years, parts of the Donetsk and Luhansk regions along the Russian border — known as Donbass — have been controlled by pro-Russia separatists.

Russia and Ukraine have recently traded blame over heightened conflict in Donbass between the pro-Russia separatists and Ukrainian forces.

Ukraine has said it fears a full-scale Russian invasion. But Moscow has denied such intentions. However, it has pledged to go to lengths to protect Russian speakers in the region.