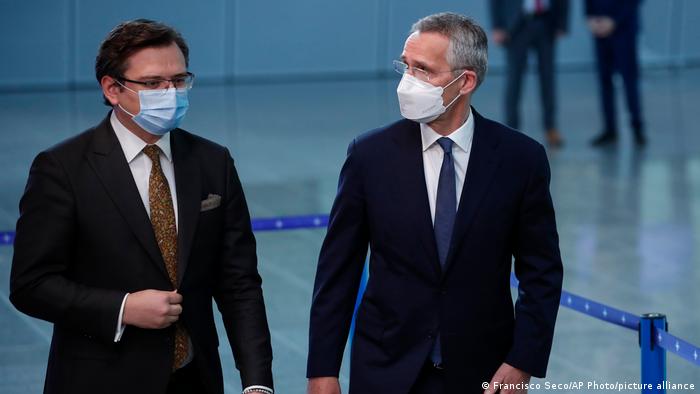 Stoltenberg's comments came ahead of an emergency meeting of allied foreign and defense ministers over the conflict in the eastern Ukraine region.

"In recent weeks, Russia has moved thousands of combat-ready troops to Ukraine's borders, the largest massing of Russian troops since the illegal annexation of Crimea in 2014," Stoltenberg said at a news conference with Ukrainian Foreign Minister Dmytro Kuleba.

"Russia must end this military buildup in and around Ukraine, stop its provocations and deescalate immediately," Stoltenberg said.

Ukraine calls for sanctions against Russia

Kuleba flew to Brussels for talks with Stoltenberg on Tuesday, a day after Ukraine accused the Kremlin of ignoring a request for top-level negotiations.

Russia and Ukraine have traded accusations about the increasing tensions in the eastern Donbass region.

"At the operational level, we need measures which will deter Russia and which will contain its aggressive intentions. This could be ... a new round of sanctions, which would raise the price of Russian aggression," Kuleba said.

The Kremlin accused the United States and other NATO countries of turning Ukraine into a "powder keg."

"If there is any aggravation, we of course will do everything to ensure our security and the safety of our citizens, wherever they are," Deputy Foreign Minister Sergei Ryabkov was quoted as saying by Russian news agencies.

"But Kyiv and its allies in the West will be entirely responsible for the consequences of a hypothetical exacerbation," he said.

He said that training activities have been conducted on Ukrainian territory for many years and have lead to a negative impact on Russian security.

"Training activities have been intensified, a network of biolaboratories has been deployed that are engaged in activities that, to put it mildly, cause us alarm and concern."

Russia has not denied the troop buildup along the border but officials said it was not planning on going to war with Ukraine.

Officials insisted that the Kremlin is entitled to move troops "within Russian territories"  and pledged to protect Russian speakers in the region.

In recent weeks, Western officials have expressed concerns about Russia's military buildup close to Ukraine's eastern border and the Crimean Peninsula, which Russia annexed in 2014.

US Secretary of State Antony Blinken is scheduled to hold talks with Kuleba. He recently said Russia could face "consequences" if it acted "aggressively" against Ukraine.

Ukraine is a close partner to NATO, although it is not one of the 30 member states.

According to Ukraine, the conflict has killed at least 14,000 people since 2014.