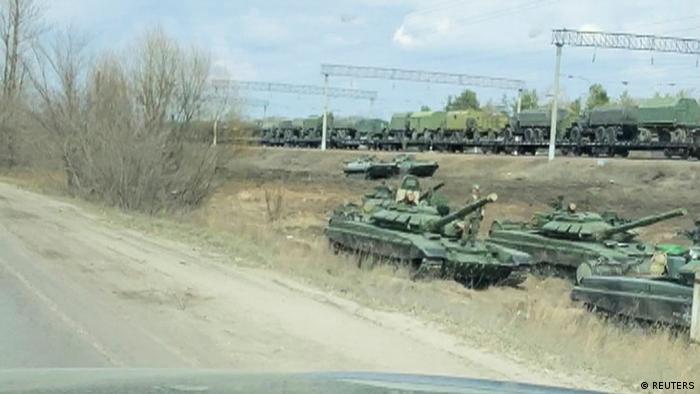 European Union foreign ministers met at a virtual conference on Monday to reassess the bloc's options as Russia builds up its military presence at the Ukrainian border.

The West has struggled to adequately counter recent actions by Moscow it considers reprehensible, including the treatment of jailed Russian opposition leader Alexei Navalny.

"All in all, the relations with Russia are not improving, but the contrary; the tension is increasing in different fronts," said the EU's top diplomat, Josep Borrell, ahead of the meeting. "We call on Russia to withdraw their troops."

Borrell said Russia had built up a troop presence on the Ukraine border and in annexed Crimea. "It is more than 150,000 Russian troops massing on the Ukrainian borders and in Crimea. The risk of further escalation is evident," he added. He declined to say where he got the troop numbers, but a statement released later revised the tally down to "more than 100,000."

Ukrainian Defense Minister Andriy Taran had put the estimated number of troops at 110,000. The US Pentagon said that the military buildup was greater than the one during 2014, and it was not clear whether it was for training purposes.

Borrell confirmed that for the time being, no sanctions or expulsions of Russian diplomats had been planned.

The talks have included a video conference with Ukrainian Foreign Minister Dmytro Kuleba, in which he asked the EU to impose "sectoral sanctions" on Russia.

"I proposed a step-by-step plan on how to discourage Moscow from further escalation," Kuleba tweeted after the video conference. "Key element: preparing a new set of sectoral sanctions. Individual ones are not sufficient anymore." 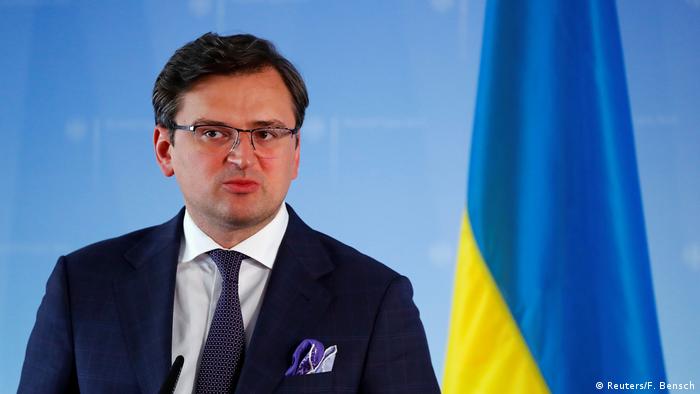 Ukrainian President Volodymyr Zelenskyy has called for more aid from the West in view of Russia's actions, which represent the largest deployment of Russian troops at the border to Ukraine since 2014.

Lithuanian Foreign Minister Gabrielius Landsbergis said he hoped Europe would "speak in one voice, saying that Russia needs to draw away its troops and stop the escalation."

He said the EU should also make clear it is "ready to consider sanctions if red lines are crossed."

What are Merkel and Macron saying?

In an interview with US broadcaster CBS News Sunday, French President Emmanuel Macron said that "clear red lines" must be drawn with Moscow over Ukraine, with sanctions an option.

"We will never accept new military operations on Ukrainian soil," Macron said, while emphasizing that dialogue with Moscow was essential.

Macron met with Zelenskyy on Friday and the two held a video conference with German Chancellor Angela Merkel joining remotely. Both Macron and Merkel called on Russia to withdraw its troops from the border regions.

In a phone call between Merkel and US President Joe Biden on Wednesday, both leaders also agreed that it was necessary to call on Russia to reduce the latest troop reinforcements near the border to Ukraine "in order to achieve a de-escalation of the situation," according to Merkel's spokesman Steffen Seibert.

Later on Monday, advisers to the heads of state of Ukraine, Russia, Germany and France were scheduled to hold talks in Kyiv on the situation in Ukraine. 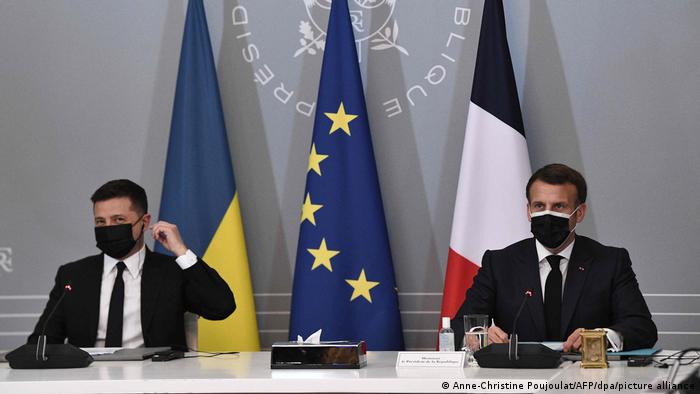 Zelenskyy and Macron met in person, with Merkel joining via video link

What is the situation in eastern Ukraine?

Fighting between Ukrainian forces and Russia-backed separatists in eastern Ukraine has killed more than 14,000 people since it erupted after Moscow's annexation of the Crimean Peninsula from Ukraine in 2014.

Clashes in the eastern regions intensified earlier this year, effectively ending a ceasefire that was officially agreed last July.

The EU is opposed to the annexation and to Russia's involvement in the conflict in Ukraine's Donbass region, but Brussels' influence has proven to be limited.

France and Germany helped negotiate a peace deal for eastern Ukraine that was signed in the Belarusian capital, Minsk, in 2015. Since then, they have mediated the conflict — in the regions of Luhansk and Donetsk — under the so-called Normandy format.

Kyiv and the West accuse Russia of sending arms and troops to support the Donbass separatists, something that Moscow denies.