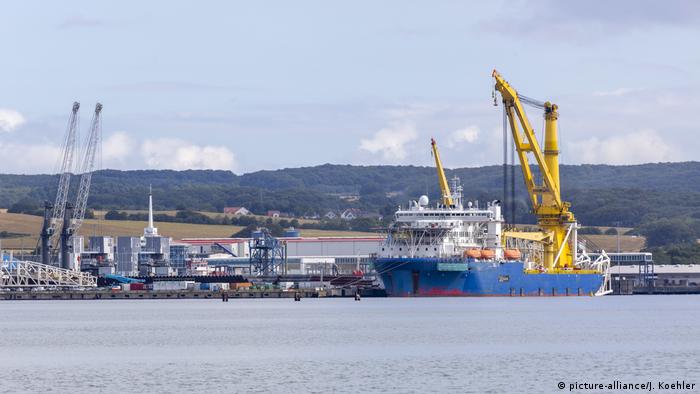 German Foreign Minister Heiko Mass on Monday said he had expressed "displeasure" to US Secretary of State Mike Pompeo about threats made by three US senators.

"I mentioned it in a telephone call with Mike Pompeo yesterday and expressed my surprise and displeasure," he told reporters.

In their letter, the senators describe the nearly complete pipeline as a "grave threat to European energy security and American national security."

"The only responsible course of action is for Fährhafen Sassnitz GmbH to exercise contractual options that it has available to cease these activities,'' they said in the missive.

Murkan Port, located in the small seaside town Sassnitz on Baltic Sea island of Rügen, serves as a key logistic and service center for ships constructing the German end of the pipeline.

"The German government is in contact with the companies against which sanctions have been threatened."

The 10 billion-euro ($11 billion) pipeline, owned by Russian gas company Gazprom, is set to double Russian natural gas transported from Russia to Germany. The project is near completion beneath the Baltic Sea.

The US — which strongly opposes Nord Stream 2 — fears that the pipeline will increase Europe's dependence on Russia, which both Berlin and Moscow dispute.

Ukraine and Poland, which will be bypassed by the gasline, argue that it will further embolden Russian President Vladimir Putin by giving Moscow more control over crucial energy flows.

Pompeo last month mooted the possibility that German companies could suffer sanctions for even small investments in the pipeline.

Germany had expressed anger at the US threat, saying it interfered in German internal affairs. Despite political differences with Russia, Berlin sees the Nord Stream 2 pipeline as a positive step towards more stable, cheaper and cleaner energy as it phases out coal.