Journalist Maria Ressa and Dmitry Muratov have been presented with their Nobel Peace Prize awards in Oslo. Both have been subject to threats for their work. 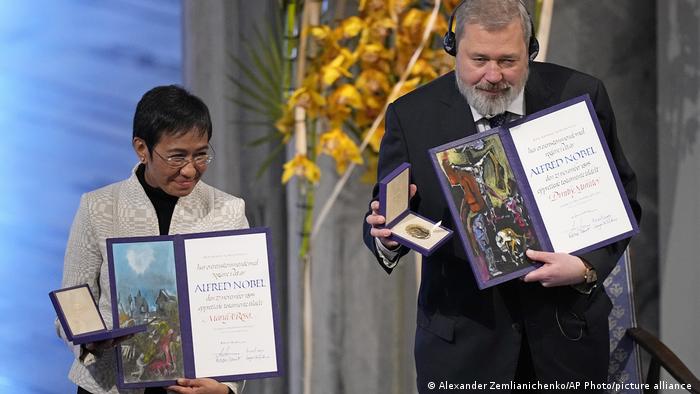 The two laureates were awarded the prize on October 8 "for their courageous fight for freedom of expression" in the face of authoritarian governments.

Both have been the subjects of attempted crackdowns for their reporting on human rights abuses and corruption carried out by the governments of Philippine President Rodrigo Duterte and Russian President Vladimir Putin respectively.

Upon receiving the award, Ressa said she was a "representative of every journalist around the world who is forced to sacrifice so much to hold the line, to stay true to our values and mission, to bring you the truth and power to account."

Muratov used his speech to warn that "the world has begun to turn toward dictatorship."

What did Maria Ressa say?

Ressa lamented what she termed the "toxic sludge" fueled by social media giants, referring to the misinformation that they allow to spread.

She criticized the networks of disinformation that journalists have to fight against with facts. These lies target not only elections, she said, but also critical journalists as well as minority groups such as women, LGBT people and others.

"An invisible atom bomb has exploded in our information ecosystem," Ressa told the audience at the award ceremony, "and the world must act as it did after Hiroshima, like that time, we need to create new institutions like the United Nations and new codes stating our values, like the Universal Declaration of Human Rights."

What did Dmitry Muratov say?

Muratov called for a minute's silence to honor journalists killed in the line of duty.

"Let us rise and honor my and Maria Ressa's reporter colleagues, who have given their lives for this profession, with a minute of silence, and let us give our support to those who suffer persecution," Muratov said, adding: "I want journalists to die old."

He warned of strongmen dictators who push for war to appear strong and conduct saber-rattling for their own benefit.

"'Are you not afraid?' is the most common question to my colleagues, but this is their mission. As governments continually improve the past, journalists try to improve the future," he said.

How are the two Nobel Peace Prize laureates?

Ressa, who founded the Rappler online news site in her home country, was only given permission to travel to Norway for the award ceremony last week.

She is embroiled in a series of legal cases which her supporters say is a result of her scrutiny of the government's deadly war on drugs.

Muratov was one of the founders of the Novaya Gazeta newspaper that carries out independent investigative journalism in Russia.

The announcement of Muratov's win was greeted by President Putin with a veiled threat against him.

Muratov has already said that he is dedicating the prize to the six journalists who have been killed while working for Novaya Gazeta.