The Russian leader has finally broken his silence on Novaya Gazeta editor Dmitry Muratov. But Muratov has shown himself to be unimpressed by what seems like a warning. 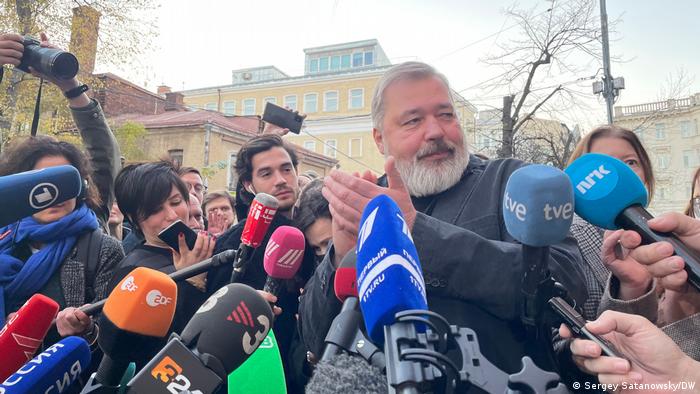 Muratov is an outspoken critic of the Kremlin

Russian President Vladimir Putin on Wednesday made a seeming threat toward journalist Dmitry Muratov, who was recently awarded the Nobel Peace Prize for his work at the Novaya Gazeta newspaper.

"If he covers himself with the Nobel Prize like a shield to violate Russian laws, he does so consciously," Putin said at a public event in Moscow. "If he doesn't break Russian law and there's no reason to declare him a 'foreign agent,' then that won't happen."

The Kremlin has previously congratulated Muratov on the award, and the journalist said he had been assured that the prize money was no reason to declare him a "foreign agent."

A controversial law compels all media and nongovernmental organizations in Russia to register as "foreign agents" if they receive financial assistance from outside the country. Critics see the law as an instrument the government can use against its political enemies and critical independent media outlets.

Muratov later said that he would not refuse the award whatever the Russian government did.

"I am not Pasternak," he told the Russian Interfax news agency, referring to the famous Russian author Boris Pasternak, who was awarded the Nobel Prize for Literature in 1958 but was forced to give it up by the Soviet government of the time.

"The state can do what it wants, but we will accept the prize; we will not renounce the prize," he said.

Muratov has already said he would be dedicating the award to the six journalists at his newspaper who have been killed over the years.

The Norwegian Nobel Committee awarded the Nobel Peace Prize jointly to Muratov and Filipino journalist Maria Ressa on Friday. Both were honored as champions of freedom of speech in their respective countries.