Philippines: What does Maria Ressa′s Nobel Peace Prize mean for the rights movement? | Asia | An in-depth look at news from across the continent | DW | 11.10.2021

Philippines: What does Maria Ressa's Nobel Peace Prize mean for the rights movement?

Advocates have praised the award to Ressa for drawing global attention to the Philippines' struggle for press freedom and human rights. It also marks the first time the prize has been handed to a journalist. 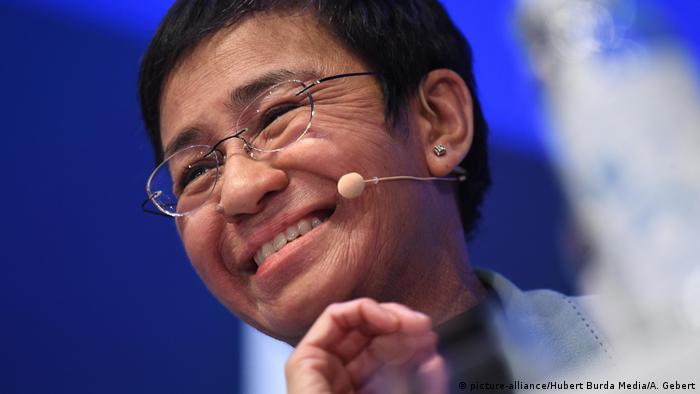 The Nobel Peace Prize for Filipino journalist Maria Ressa has brought global attention to the struggle for human rights and press freedom in the Philippines.

It is also the first time the prize, whose previous recipients include Mother Teresa, has been awarded to a journalist. Ressa shares the award with Russian journalist Dmitry Muratov.

"The Nobel Prize upholds the sanctity of facts and the truth and the role that journalists play in democracy, especially a democracy like ours, which is in a constant state of flux because of corruption and tyranny," Human Rights Watch senior researcher Carlos Conde told DW.

Meanwhile, Froilan Gallardo, a photojournalist based in the southern part of the Philippines, said the prize validates the risks that he and other media workers have taken to carry out their work in the country.

Two years ago, Gallardo was red-tagged — a term used in the Philippines for "red-baiting" (persecuting or discrediting someone as a communist) —  and pamphlets with his photo were distributed in churches and malls.

"I lived on the edge for several months, always fearful that gunmen would attack me any day," Gallardo told DW.

The prize 'shows us we are not alone'

"The Philippines is one of the most dangerous places for journalists to work. It is especially true among us journalists working far away from Manila. If we cross the powerful, we die. Giving the Nobel Peace Prize to Maria Ressa shows us journalists that we are not alone," he added.

Celebrities and politicians around the world applauded the award this week, including rock band U2 and former US President Barack Obama.

The award comes at a time when suppression of press freedom in autocratically ruled countries around the world has made it deadly for journalists to do their job.

The Philippines is ranked by Reporters Without Borders (RSF) as being among the most dangerous places in the world to be a journalist. The situation has only worsened under President Rodrigo Duterte, whom RSF once called a "predator of press freedom."

Ressa, 58, was convicted of cyber libel last year and is facing several legal cases that could see her imprisoned for up to 100 years and the newsroom of her news website, Rappler, shut down.

"Press freedom in the Philippines has always been fragile, but this administration is notable for openly attacking members of the press," Jonathan de Santos, chairperson of the National Union of Journalists of the Philippines (NUJP), told DW.

Since the start of the Duterte administration in 2016, the NUJP has noted 30 cases of journalists being labeled as subversive or enemies of the state, resulting in surveillance, harassment and in some cases, arrests.

Nineteen journalists were killed between 2016, when Duterte assumed the presidency, and 2020, according to NUJP figures.

Ressa is also the first woman to receive a Nobel Prize this year, a fact that has proven significant for female journalists like Lady Ann Salem, who told DW that the working environment has become more toxic due to misogynistic comments made by Duterte.

"Having to cover the president through his rape jokes or sexist innuendos against women is painful enough, but there are also physical and legal attacks," Salem, who is also the communications officer of the International Association of Women in Radio and Television, told DW.

Last February, Salem and a trade union leader were arrested and detained for almost three months on charges of illegal possession of firearms and explosives. The government later filed a new case against Salem, seeking a reversal of a decision made earlier to dismiss the charges against her.

As prestigious as the Nobel Prize is, the award will have no direct bearing on the pending cases that Ressa faces.

"The courts rule on the merits of each case, so the award does not directly impact the review. However, we believe that Maria was wrongly convicted and our appeal stands on its merits independently of the award," Theodore Te, Ressa's legal counsel, told DW.

'The law has been weaponized'

Nonetheless, the symbolism of the awarding of the Nobel Peace Prize to journalists remains undiminished, he said.

"Through the years, the media has been attacked and the law weaponized. The award to Maria and the light that it shines on Philippine journalism will give authoritarians and budding despots pause. The world is watching," said Te.

Duterte's supporters, however, were not enthused by the award. The news of the prize drew the ire of critics like National Artist for Literature F. Sionil Jose. In a Facebook post, Jose said that Ressa did not deserve the award because "the Philippine press is alive and well" and "those Nobel judges were taken for a ride by Western media hype."

Meanwhile, Duterte's office offered a statement on the prize three days after it was announced.

"The award is a victory for a Filipina and we are very happy for that," presidential spokesperson Harry Roque said in his weekly press briefing on Monday.