Who is Maria Ressa, journalist and Nobel Peace Prize laureate? | Asia | An in-depth look at news from across the continent | DW | 08.10.2021

Who is Maria Ressa, journalist and Nobel Peace Prize laureate?

Ressa received the award for "efforts to safeguard freedom of expression," primarily with her news outlet Rappler, and during a decadeslong career in investigative and broadcast journalism in Southeast Asia. 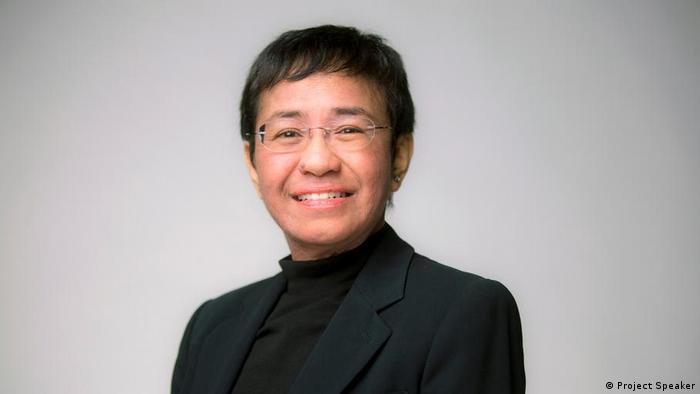 Maria Ressa, the CEO and executive editor of Manila-based news outlet Rappler, received the 2021 Nobel Peace Prize on Friday. The award also makes her the first Filipino to win a Nobel Prize.

The Norwegian Nobel Committee handed her, along with journalist and Putin critic Dmitry Muratov, the award for "efforts to safeguard freedom of expression, which is a precondition for democracy and lasting peace."

"Nobel Prize laureate Maria Ressa uses freedom of expression to expose abuse of power, use of violence and growing authoritarianism in her native country, the Philippines," the committee tweeted.

Ressa, 58, founded Rappler to combat misinformation and document human rights abuses carried out by Philippine President Rodrigo Duterte, including during his deadly war on drugs.

Her site, launched in 2012, is one of the most popular in the country. And her Nobel Peace Prize isn't the first award she has won for her work.

Ressa was named a TIME magazine Person of the Year in 2018 and was awarded the 2018 Gwen Ifill Press Freedom Award from the Committee to Protect Journalists. Other honors she has received include the Golden Pen of Freedom and the Knight International Journalism Award.

Her career extends across decades. She has been a journalist in Southeast Asia for over 30 years and was previously the CNN bureau chief in Manila and later in Jakarta. She additionally worked for six years as the head of News and Current Affairs at ABS-CBN, the largest media conglomerate in the Philippines.

Ressa has written two books on the rise of terrorism in Southeast Asia, called "Seeds of Terror: An Eyewitness Account of Al-Qaeda's Newest Center" and "From Bin Laden to Facebook."

Through Rappler, Ressa aims to combine professional journalism with citizen journalism and crowdsourcing. Her work with the outlet has led to increased calls to hold Duterte accountable for reported human rights violations.

Several attempts to shut down Rappler

In response, the government has taken several steps to shut down Rappler by charging Ressa and the publication with multiple counts of tax evasion as well as cybercrimes.

She was convicted of online libel in 2020 under the Philippines's anti-cybercrime law, which critics say is used as a means to quash dissent. In response, Ressa has accused the government of weaponizing "not only social media but also the country's laws and is using it against media organizations."

Ressa was born in 1963 in the Philippines but moved to the United States with her parents when she was 10. She received her Bachelor's degree in English from Princeton University and returned to the Philippines shortly after.

"Every journalist has to hold the line because we will only get weaker with time. We're fighting the vast powers of government — and I'm not against President Duterte. I'm just doing my job, and I ask the government to do its job and stop abusing its power," she said in a 2018 interview, responding to multiple cases launched against her.

Her "hold the line" comment was later adopted as a hashtag in support of press freedom and journalists worldwide.

The Nobel Peace Prize awarded to the Philippine journalist Maria Ressa is a recognition of the importance and precarity of holding the line for independent journalism in an age of authoritarian populism and fake news.