No way out for deported Balkan Roma

Seeking asylum in Germany was a temporary way out of misery for Serbian Roma for years. No longer: more and more of them are being deported, including the Simic family. Nemanja Rujevic reports. 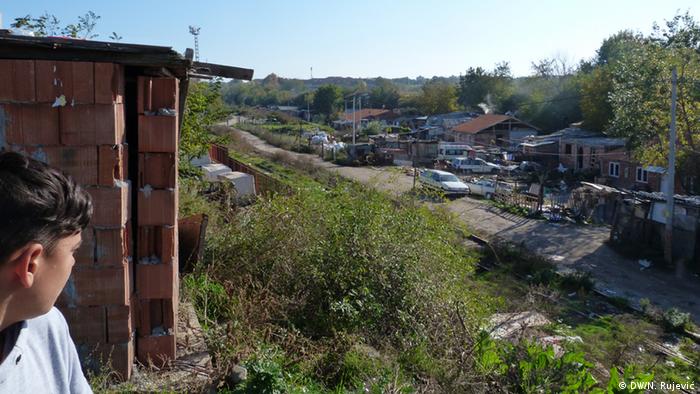 Sasa Simic is known as "Tesla" by his neighbors in the Roma Quarter on the outskirts of the small Serbian town Mladenovac. Harkening back to the great Serbian-American inventor, the nickname is due to Simic's work - he has been an electrical worker for decades. There was no television that he could not fix.

"Instead of fixing TVs, I once mistakenly let one fall to the floor, destroying it," the small 45-year-old said. He was deemed unfit to work by Serbian authorities and owes around 10,000 euros to the government for power and utilities.

But what makes him truly desperate is a word stamped on his passport in German, "Abgeschoben" - deported.

The path to asylum

Simic could explain for hours why he packed up his things a year ago and left home with his wife, son and daughter. Such a trip local Roma call "going on asylum."

He talks quietly but extensively about discrimination; about how his son is repeatedly kicked out of class by his teacher with the words "get lost, gypsy!"; about how Roma in Serbia live at the edges of society and receive suspicious looks. 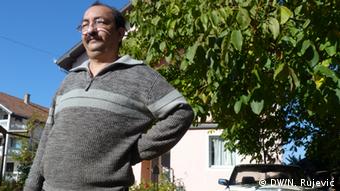 "For a long time we thought that we really could receive asylum in Germany," Simic said while flipping through documents that he had shown to the decision maker at the refugee office.

His wife Daliborka pointed out that the family did also leave for Germany because of money concerns. The family received 1,100 euros (1,200 dollars) in Germany - a sum that most people in Serbia can only dream of.

"When we first started to receive the money, we would go to the supermarket, and I would say to the kids: go, pick out whatever you want." Her eyes light up when she tells about their time in the tiny central German town Bad Zwesten, and about friendships with other Balkan Roma, Arabs and "blacks" from the refugee home.

She has saved an issue from the local newspaper. There is a small article on the last page about integration with a group photo - including the Simics - next to the mayor.

The German authorities put an end to the family's hopes, ordering them to leave by March. But the family stayed longer, for a reason made clear on Sasa's chest: a scar received from a heart operation that he had to undergo in Germany.

Time was up though in the middle of October. Police hammered on the door at five in the morning. "We showed them two different doctor's notes saying that I have chronic heart troubles, that I am not allowed to travel in this condition and that I could die in Serbia because I won't receive the proper care here.

But they just said "pack your necessities."

Around 11,000 people have been deported from Germany in this year alone. 27,000 more have left voluntarily with German government support.

Tens of thousands from government-designated "safe origin countries" in the Balkans still remain in the Germany, without hope according to German lawmakers.

This mostly affects ethnic Albanians and Roma. Nine out of ten asylum seekers from Serbia belong to Roma minorities. 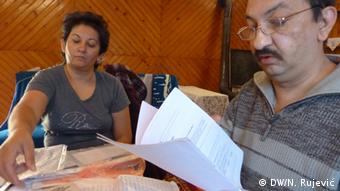 Sasa and his wife Daliborka

Vitomir Mihajlovic, President ot the National Council of Roma Minorities in Serbia, welcomes me in his office in the center of Belgrade. Behind him hands the Serbian tricolor and the Roma flag: blue for the sky, green for the earth and a red wheel recalling the Indian origin of the Roma. Some see the wheel also as a symbol that the Roma will never truly be at home.

"The problem of poverty has existed for generations," Mihajlovic said. "With it comes discrimination from birth until death - in every aspect of life from education to the job market to the healthcare system."

This is the reason, he says, why many decide to pursue asylum hopelessly.

Because Germany usually halted deportations in the winter, some would try to escape the unbearable cold in their tin houses again year after year. Germany has now stopped doing this, which Mihajlovic finds inhumane. "International conventions, which many countries subscribe to, should not allow for such deportations, especially in winter," he said.

The German government has received support for the policy change from leaders of Balkan countries. The Serbian government described Roma as "fake refugees by trade," and the prime minister called on Germany to cut asylum seekers off from social welfare.

This is an attempt to push the blame onto a single ethnic minority, believes Dragan Popovic, who works with the Belgrade NGO Center for Practical Policy. "Like all countries in the region, Serbia is trying to present itself as well as possible to Brussels and send a signal that the country is not a source of asylum seekers - although it is, because of its economic situation."

A large portion of the returnees simply goes back to their home. For those who have no home, there is the refugee commissariat.

Nobody there has time for an interview, as "all hell has broken loose with the migrant crisis." By that is meant the current influx of migrants from the Middle East and Africa, the thousands of people who pass through Serbia every day. Deportations from Germany are, on the other hand, business as usual. A reintegration strategy should be adopted, the commissariat said in an earlier statement. 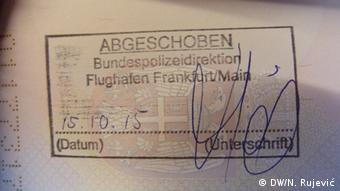 The deportation stamp in Sasa's passport

"Reintegration" has meant nothing so far for Sasa Simic.

He walks through the dusty streets of the Roma quarter and points to the some houses - they are egotistical and kitschy, decorated with lions and eagles, testaments to the golden age of Yugoslavian guest workers.

Simic too owns a three-storey house with a pink façade, given to him as a child by his father. But inside only two rooms are suitable to live in. The others are still under construction, although Simic does not have the money to finish them. He gets his water from a fountain and he connected his electricity without authorization to the power grid.

His 17-year-old son Aleksandar is trying to reenter the Serbian school system. But he doesn't foresee a fresh start in his hometown.

"In Germany everything was beautiful. The people were nice," he said in German, with hardly an accent. It would be great to return there to find a job and earn some of money.

His father too has already contemplated a second try. "But my health condition does not allow me, I have the stamp in my passport that has I cannot legally enter, and I would have to join up with the Syrians," Simic said. "They walk through forests and fields - and I can't."

Serbian migrants who have tried to apply for asylum in Germany are being sent back following Berlin's decision to declare Serbia a country of safe origin. Lidija Tomic visited a collective center for returnees in Sabac. (29.09.2015)

The chance of getting political asylum in Germany also depends on the country you're from. (24.09.2015)