Chancellor Angela Merkel has warned German parliamentarians not to expect a quick solution to Greece's dispute with international creditors over its debt. She was speaking to the Bundestag ahead of an EU summit. 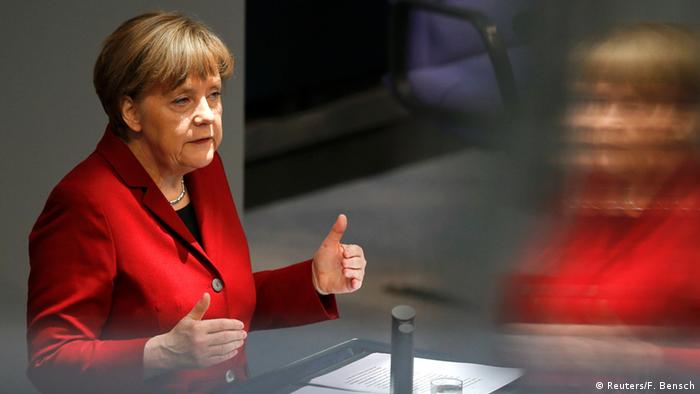 Chancellor Merkel outlined a number of issues that were to be on the agenda during two days of talks among EU leaders set to open in Brussels later on Thursday. These included the proposed TTIP free-trade agreement between the European Union and the United States and the possible extension of economic sanctions on Russia over the ongoing conflict in Ukraine.

Later in her speech, she addressed an issue that will be on leaders' minds but not on the agenda of the actual summit: the dispute between Greece and its international creditors over the terms of its financial bailout and reforms promised by the new left-wing government in Athens.

Merkel warned lawmakers in the Bundestag, the lower house of parliament, not to expect a quick solution to the dispute - not during the summit in Brussels, nor during a meeting with new Greek Prime Minister Alexis Tsipras in Berlin on Monday.

Referring to the talks on Monday, Merkel said she expected the discussion to be frank and open.

"We will have time to talk to each other in detail and perhaps also to argue," she said, sparking laughter from some parliamentarians. Merkel added that while Germany and other members of the international community were prepared to help Greece, Athens needed to uphold its side of the bargain by implementing much-needed financial reforms so that one day it would no longer require assistance.

While Greece's dispute with its creditors is not on the agenda of the EU summit, the problem is regarded as so pressing that at the last minute the president of the European Council, Donald Tusk, called a separate meeting on the sidelines of the talks to focus strictly on Greece.

Those talks, to be held on Thursday evening, are to involve Merkel, Tsipras, and French President Francois Hollande, as well as the president of the European Commission, Jean-Claude Juncker, European Central Bank President Mario Draghi, and Dutch Finance Minister Jeroen Dijsselbloem, who chairs the Eurogroup - a council of eurozone finance ministers.

The meeting is meant to give Tsipras the opportunity to try to convince key Greek creditors to accept Athens' promises of reform in return for relaxing the terms of the country's bailout.

This comes amid growing fears not just in Germany but all over the European Union that Greece's government could find itself unable to pay its bills as soon as Friday, something that could trigger what's been dubbed a "Grexit," a scenario in which Greece would wind up leaving the eurozone.

An entertainer has said he manipulated a video of the Greek finance minister giving the finger to Germany. While debate over the video's authenticity rages, the satirist says it showed a German passion for being angered. (19.03.2015)