New safety measures could hasten scrapping of German nuclear plants | Germany | News and in-depth reporting from Berlin and beyond | DW | 31.03.2011

The German environment minister has announced criteria for nuclear safety tests to be carried out by mid-June. The results may determine the future of Germany's energy policy amid growing anxiety about nuclear power. 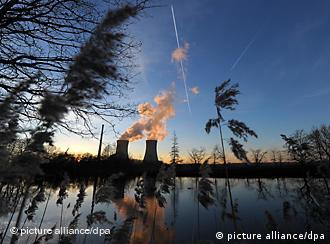 The sun could be setting on the Grafenrheinfeld nuclear plant

Environment Minister Norbert Röttgen on Thursday announced the details of planned stress tests to assess the stability of Germany's nuclear power plants. The government had already imposed a moratorium on the lifespan extension of the country’s oldest nuclear plants in reaction to the unfolding catastrophe in Fukushima. On the basis of the safety checks, to be carried out by mid-June, the government will decide whether the reactors should be closed permanently.

Röttgen presented the recommendations put forward by the Reactor Safety Commission, which is made up of a team of 16 physicists, engineers and representatives of the nuclear industry. Röttgen called the work of the commission "an important technical basis" for political decisions about energy policy. 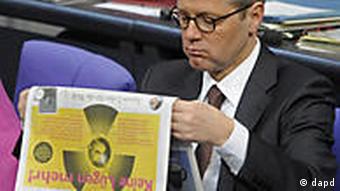 Röttgen has been forced to review his energy policy

"It's a question of whether safety has to be redefined in the light of new estimates," Röttgen told journalists in Berlin.

"What would happen if an even bigger earthquake hit Germany?" Röttgen asked. "Do we have enough reserves in our nuclear power plants to cushion against that as well?"

Teams of experts will be sent into every reactor in Germany, to carry out risk assessments, he said. The commission will publish an initial report by mid-May.

Prepared for all eventualities

Head of the commission, Rudolf Wieland, said in the light of the unprecedented impact of the massive earthquake and tsunami in Japan, it was important to analyze the potential effects of unforeseen natural disasters or terrorist attacks on German power stations.

Experts say the shells of Germany’s oldest reactors are too thin to withstand an airplane crash and that renovation would be too costly and ineffective. 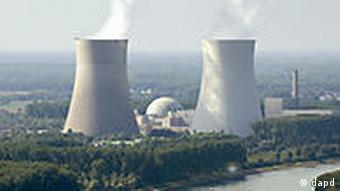 The Philippsburg plant has already been temporarily closed

Wieland said the commission would examine whether there were sufficient reserves of cooling water to deal with any potential damage if infrastructure was affected. It will also take into account the impact of climate change or drought.

Until now, Wieland explained, safety checks only made provision for loss of power for a period of two hours, now the teams will consider what would happened if the power failed for longer than 72 hours.

As the scale of the catastrophe in Fukushima emerged, and public anxiety grew, Chancellor Angela Merkel announced that seven of Germany's oldest nuclear reactors, plus another power station in northern Germany would be temporarily shut down. In addition, the Grafenrheinfeld plant in Bavaria is closed for scheduled repairs. As a result, just eight of Germany's 17 nuclear plants are currently delivering power to the national grid.

Merkel had been a long-time advocate of nuclear power, who campaigned on a promise to extend the lifespan of German plants. Her abrupt change of course, shortly before state elections, angered members of her own party and led opposition parties to accuse her of compromising her long-held views in a drive to win votes.

The shift appeared to weigh heavily on voters, with a dramatic loss in support for her Christian Democratic Union (CDU) in favor of the anti-nuclear Green Party in recent elections. 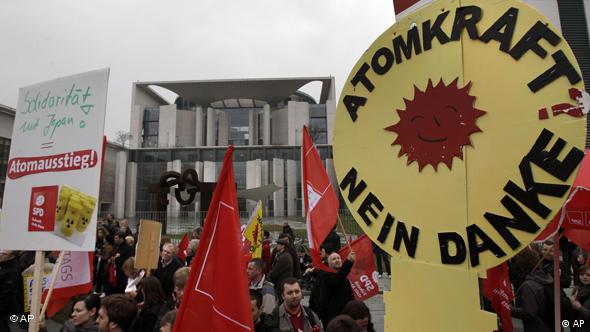 Nuclear energy: 'no thanks!' The German public have made their feelings clear

Senior officials say that the problem of ending nuclear power within a decade would be the cost, estimated at hundreds of billions of euros. This would be needed to build overland lines to carry power from vast new wind-turbine farms to main cities.

The Social Minister in the southwestern state of Saarland, Christian Democrat Annegret Kramp-Karrenbauer warned of price rises if there were to be a move away from nuclear power.

"The consumer shouldn't have to carry too much burden," she told Thursday's edition of the Rheinische Post newspaper. "The question whether we can heat our homes should not become a social question."

Germany has suspended plans to prolong the lives of its nuclear power plants after the problems in Japan. But was this a safety-conscious reaction, or an electioneering tactic? Even coalition leaders appear undecided. (24.03.2011)