Chancellor Merkel has created an ethics commission to study the use of nuclear power in Germany. She has also said that depending on the outcome of nuclear plant inspections, some could be shut down earlier than planned. 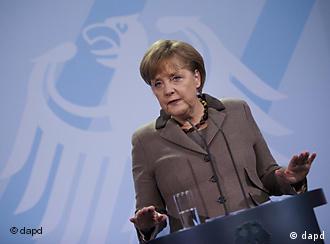 German Chancellor Angela Merkel has indicated that she is open to the possibility of partially revoking an extension of the operating lives of the country's nuclear power plants, which her government passed just last autumn.

She made the statement after a meeting in Berlin on Tuesday with the premiers of the five German states that have nuclear power plants.

The chancellor told reporters that an ethics commission would be formed to consider the risks that German society is willing to bear from operating nuclear power plants.

The panel is to be co-chaired by the former executive director of the United Nations Environment Program, Klaus Töpfer, and the president of the German Research Council, Matthias Kleiner. Töpfer is also a former German environment minister. They are to be joined by several other senior figures, including a philosopher, a Catholic archbishop and a chemicals company chairman.

In addition to the new ethics commission, the already existing nuclear safety commission is to use a three-month moratorium to conduct inspections of all of Germany's nuclear power plants. Among the issues to be examined is their resilience against cyber-attacks or two disasters happening at one time.

"I can't rule out the possibility that the inspections will have an impact on the operational life spans," Merkel said.

As part of the three-month moratorium announced last week, the chancellor ordered Germany's seven oldest nuclear plants to be temporarily shut down while the tests were conducted. 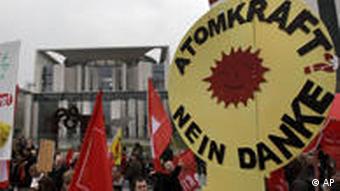 On Tuesday, Merkel refused to comment on whether these plants would reopen when the moratorium expires in June.

"I cannot predict the result of an entire inspection and I don't want to engage in speculation," the she said. "I have said that the time after the moratorium will be different from the time before the moratorium, and I can't give further details today."

The center-right government of Merkel's Christian Democrats and the liberal Free Democrats drew harsh criticism from the opposition and anti-nuclear groups last autumn, when it extended the lives of Germany's nuclear plants by an average of 12 years.

That move has been suspended, not cancelled, under the moratorium, which was imposed in light of the crisis at the Fukushima nuclear plant in Japan.

Tuesday's meeting is to be followed up with a meeting on April 15, when Chancellor Angela Merkel is to invite the premiers of all 16 of Germany's states to discuss how the move to renewable energy can be accelerated.

Sweden is one of the few countries with plans for an ultimate storage solution for highly radioactive waste. But the Fukushima catastrophe has delivered a blow to the trust in nuclear power. (22.03.2011)