Netflix announced the cancellation of the series If Only (Simdiki Aklim Olsaydi) on the eve of its first production day — after it had failed to acquire the necessary regulatory license from the Radio and Television Supreme Council of Turkey (RTÜK) to start filming. 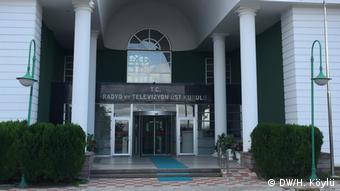 The governing body of broadcasting, RTÜK, checks every script before production

Foreign film producers like Netflix in particular have to routinely present their scripts to Turkey's Culture and Tourism Ministry for approval, which oversees the work of RTÜK. Turkish producers are also often subject to government oversight.

Screenwriter Ece Yorenc told the popular Turkish film website Altyazi Fasikul that "permission to film the series was not granted because it includes a gay character." She added that the script included no scenes depicting or implying intimacy between gay characters, despite false reports in the Turkish press claiming same-sex sex scenes would be shown.

Yorenc stressed that this act of censorship was "very frightening with regard to what still may be in store" for Turkey.

Read more: Germany warns citizens to be careful on social media when in Turkey

According to Netflix, Osman, the gay character, was only a supporting role in If Only, the main focus of the series being on the trials and tribulations of an unhappily married, middle-aged mother-of-two named Reyhan. The show was supposed to air on Netflix in 2021. 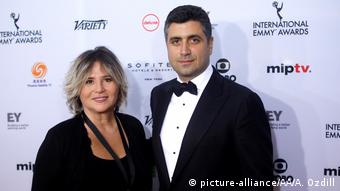 Screenwriter Yorenc had apparently offered to find ways to accommodate last-minute changes in accordance with RTÜK's standards, writes Altyazi Fasikul. But, according to Variety Magazine, Netflix preferred to pull the plug on the production while still agreeing to fully pay the If Only team.

Turkish daily HaberTurk reported that the series' cancellation would cost Netflix $5 million (€4.5 million). But Netflix said in a statement that it remained "deeply committed to our Turkish members and the creative community in Turkey."

However, Mahir Unal, Deputy Chairman of Justice and Development Party (AKP), later tweeted that he strongly believed that "in the name of working closer together (with Turkey), Netflix is going to show greater sensitivity toward Turkish culture and art."

Turkey, the most liberal authoritarian nation

That Turkish culture does not appear to be at odds with Netflix, but rather with itself: The most successful entertainers and performers in modern Turkey's history have been a transsexual (Bülent Ersoy), a drag queen (Huysuz Virjin) and a flamboyantly gay man (Zeki Müren), all of whom celebrated their respective heydays in show business long before gay marriage and other legal protections for the LGBT+ community were introduced around the world.

Since the founding of modern Turkey in 1923 by Mustafa Kemal, no laws have existed against homosexuality. In 1934, the country introduced universal suffrage well before many other nations, including some in the West. Despite these seemingly moderate attitudes in Turkey, which according to the CIA World Factbook is 99.8% Muslim, the country is finding itself in the throes of a new culture war, where sexual orientation is only one of many issues dividing society. 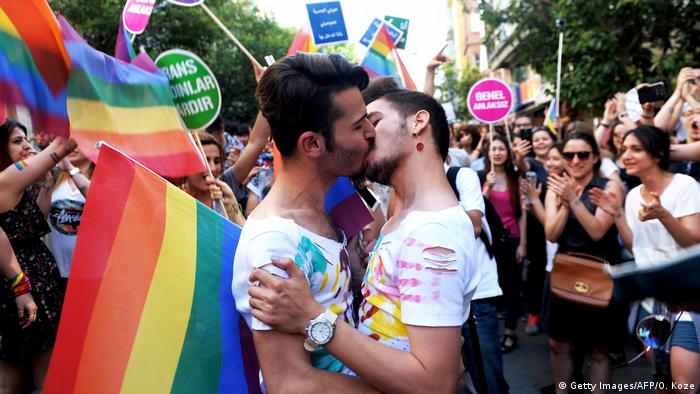 Gay activists continue to defy bans against Pride events, especially in the city of Istanbul

For the past five years, Gay Pride parades have been banned in Turkey's most populous city, Istanbul. Police have intervened to disperse crowds defying the bans, using water cannon, rubber bullets and tear gas.

Similar methods were used in 2013 during the Gezi Park protests, in which a broad base of civil society demonstrated on behalf of greater freedom and the rule of law under the leadership of Turkish President Recep Tayyip Erdogan. 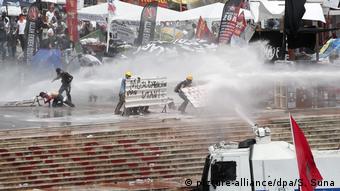 Since the 2013 Gezi Park protests in Istanbul, authorities have increasingly been clamping down on free expression

The LGBT+ community also took part in the Gezi Park protests, which lasted several months and took 11 lives. But the driving forces were numerous other social issues such as environmental concerns and domestic violence against women.

After the crackdown on the protests and the failed coup of July 15, 2016, little of that revolutionary spirit remains today.

Seven years after the Gezi Park protests, the brutal killing of yet another young woman at the hands of her partner earlier this month has highlighted how little change has taken place in Turkey. Many people regard the lack of social progress on so many issues as part of one continuous narrative.

Netflix meanwhile appears to toe a narrow diplomatic line in confrontations with foreign governments. In 2019, the streaming service pulled an episode of the comedy series Patriot Act with Hasan Minhaj  in Saudi Arabia after the telecommunications regulator alleged that it contravened the country's cyber-crime law. The episode had mocked Saudi Crown Prince Mohammed bin Salman for his alleged association with the murder of Saudi journalist Jamal Khashoggi.

While human rights groups like Amnesty International criticized the move, Netflix decided not to exit the Saudi market. Hasan Minhaj himself tweeted at the time that the political move could only help the episode achieve cult status by making it accessible on other platforms:

Future of streaming in Turkey

Since Netflix launched its service in Turkey in 2016 it has gained an audience of 1.5 million monthly subscribers. Despite ongoing rumors about the company's future plans, it is unlikely to apply any major changes to that market — at least not of its own volition.

The company might perhaps think twice before developing another Turkey-based format however, even though it has stated that it currently has "several Turkish originals in production — with more to come." 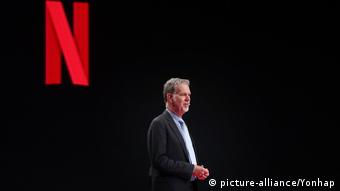 Netflix CEO Reed Hastings intends to stay in the Turkish market - but will Erdogan let him?

Still, its Turkish film and series productions fail to truly rival Turkish series shown by network broadcasters in a country where, despite the closing of over 150 media organizations after the failed coup of July 15, 2016, dozens of satellite and cable channels remain to serve an increasingly ageing population.

With Netflix failing to cash in on those formats, its Turkish operations remain something of a business gamble. But in an article with the Turkish daily Hürriyet in 2018, Netflix co-founder and CEO Reed Hastings dismissed rumors of Netflix being pushed out of the Turkish market over the country's increasingly restrictive censorship:

"We're in Saudi Arabia. We're in Pakistan. If there are no problems there, will we have problems in Turkey? I can't imagine that," Hastings said at the time.

With the literal translation of If Only (Simdiki Aklim Olsaydi) being "If I had known then what I know now," Hastings might now have second thoughts about that. 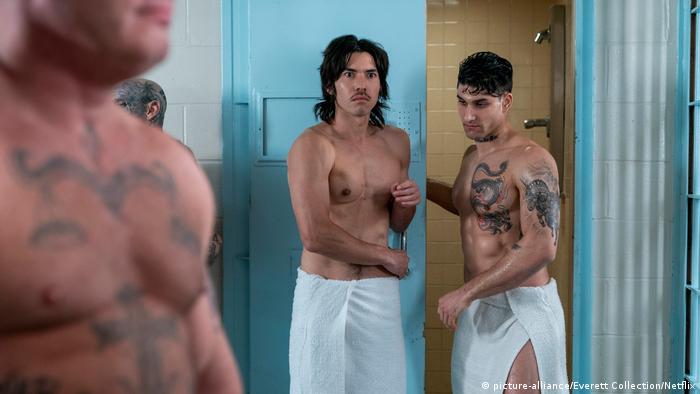 Netflix caters to the LGBTQ+ community with shows like "The Politician" (seen here), "Tales of the City" and many more

More recently, Erdogan has addressed the issue of freedom of expression on social media, brandishing Netflix as an extension of such platforms that "allow low-life to attack society."

"The fact that these channels are not subject to any kind of control is the reason why this lack of morality keeps growing. Do you understand what we mean when we say we are against social media like YouTube, Twitter, Netflix and others? It's because we want to rot out these depraved people," the Turkish president remarked on July 1, 2020. 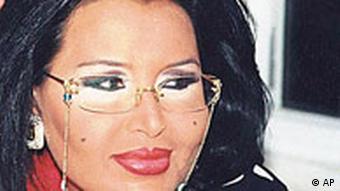 The statements were made after negative comments on social media on the birth of his latest grandchild. Soon thereafter, Erdogan announced that he would table a law before parliament to limit and possibly even ban social media in Turkey. That law will now be discussed in parliament by the end of July.

After the cancellation of the If Only series and in reaction to Erdogan's rhetoric, the hashtag #Netfliximedokunma (translating to "Don't touch my Netflix") trended in Turkey for several days. Multiple users pointed out that Netflix is a private, subscription-based service that no one has to watch if they don't wish to.

Whether freedom of expression requires regulatory control will remain a divisive issue in Turkey as long as Erdogan's AKP resorts to increasingly draconian measures to remain in power.

These have included a thinly-veiled power-grab as part of a constitutional referendum in 2017, periodic blackouts of Twitter and YouTube over the years, the repeated vilification of gays and lesbians in several speeches given by the president and — most recently — the controversial reversion of the world-famous Hagia Sophia museum into a mosque.

Critics have called this latest measure a last-ditch attempt to consolidate the Erdogan's religious-conservative voter base, as the country's political landscape faces increasing fragmentation amid increasing economic woes.

With that in mind, Netflix might simply be the latest victim of Turkey's slow and painful descent from democracy into authoritarian populism — but it's unlikely the last.

In an earlier version of this article, Mahir Unal was wrongly identified as Minister for Culture and Tourism. This mistake has since been corrected. We apologize for this mistake.

In 2013, hundreds of thousands of people took to the streets in Turkey to protest Erdogan’s authoritarian policies. The memory of those days is still present in the current presidential election campaign.

Recep Tayyip Erdogan is set to hold greater powers than any other Turkish leader has seen in decades. Former German Chancellor Gerhard Schröder was among the dozens of world leaders attending the lavish ceremony.