Thousands of worshippers flocked to Turkey's iconic Hagia Sophia for the first Muslim Friday prayers since it was once again declared a mosque by a decree from President Recep Tayyip Erdogan.

Erdogan announced the move to convert the historic building back into a mosque earlier this month and a court ruling paved the way for this to take place.

The UNESCO World Heritage Site was previously a museum, documenting the landmark's diverse religious history as both cathedral and mosque. The Byzantine-era building had been shut temporarily due to the coronavirus pandemic.

Erdogan arrived ahead of the ceremony along with the head of top religious authority Diyanet, Ali Erbas, and top ministers.

The high-profile guests wore face masks as a preventative measure against COVID-19. In total around 500 dignitaries were invited to attend.

Erdogan recited verses from the Koran before the prayers started. 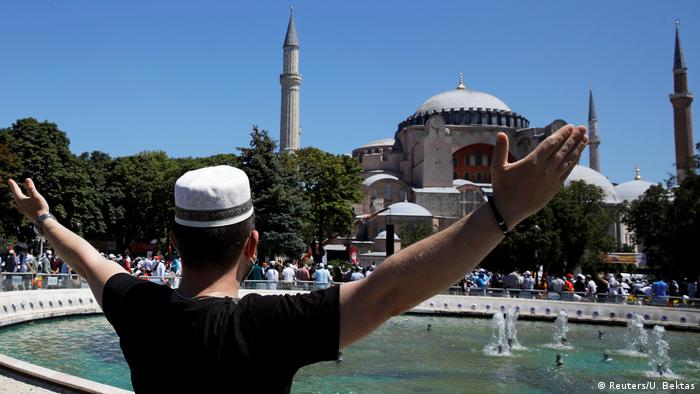 With only space for 1,000 worshippers inside, authorities erected specially designated, segregated areas outside the sixth-century monument.

Thousands of men and women quickly filled these areas. A large screen and speakers were set up in the square to broadcast proceedings.

"Istanbul's historic old town is crowded with people; there are thousands of people not only from Istanbul but from across Turkey. Many brought their prayer mats and placed them on the floor. They are now waiting to participate in these first prayers in the Hagia Sophia," said DW's Turkey Correspondent Julia Hahn reporting from Istanbul ahead of the prayers.

Some people also tried to break through a police control set up to maintain crowd order.

"This really is a mass event. This is somewhat worrying from a health perspective but they [the authorities] do want to make sure the opening ceremony gets a lot of attention" Hahn told DW.

From museum to mosque

Religious officials have had just two weeks to turn the secular space into a mosque. A huge turquoise-colored carpet has been rolled out ahead of the ceremony, said Hahn, although DW had not been allowed inside the building.

Christian icons and mosaics will be covered with curtains during prayers as Islam is perceived by some to forbid the depictions of humans and animals.

Hahn reiterated that there were "huge concerns" over the loss of the building's heritage site status. UNESCO wrote in a statement that the reconversion could challenge the property's universal value.

Erdogan's decree has been met with a mixed response. Many are happy that the museum is now a mosque.

However, his critics and opposition say Erdogan is instrumentalizing religion for political purposes. For many people, the Hagia Sophia is the ultimate symbol of the Ottoman conquest of Christian Constantinople, said DW's Hahn.

German Foreign Minister Heiko Maas expressed his dissatisfaction with the development saying the move made "no contribution to international understanding."

Maas also said the decision to convert the building into a mosque would damage Turkey's relations with the European Union.

Indeed, the EU, the US and the Catholic pope have all criticized the move, while Orthodox Christian church leaders in Greece and
the United States announced a "day of mourning" in response to the occasion.

Greek Prime Minister Kyriakos Mitsotakis described Turkey as a "troublemaker," and the conversion of Hagia Sophia into a mosque an "affront to civilization of the 21st century."