The leader of the Turkish Community in Germany group has joined a wave of criticism of plans to turn Istanbul's iconic Haghia Sophia museum into a mosque. Gökay Sofuoglu said the world would lose a symbol of harmony. 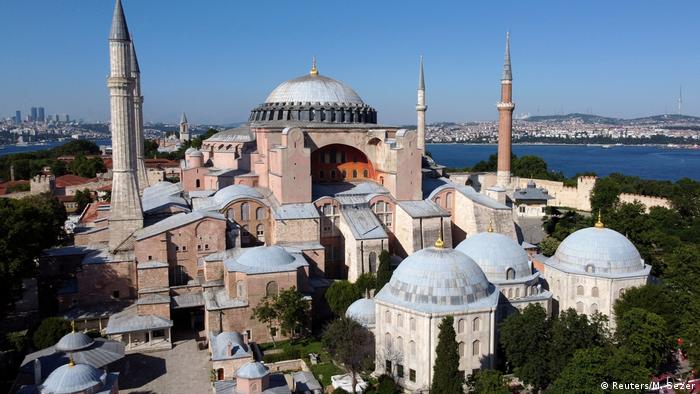 The chairman of one of Germany's foremost Turkish community groups on Sunday slammed the planned conversion of the Haghia Sophia museum as a "wrong decision."

"The Haghia Sophia is a world heritage site and a symbol of peaceful coexistence between religions," said Sofuoglu. "It is absolutely the wrong decision to turn it into a mosque," he told the news outlet RedaktionsNetzwerk Deutschland (RND).

"Turkey will now be condemned as the country that cannot cope with such an inheritance," he added.

A top Turkish court on Friday ruled the 1934 conversion of the Haghia Sophia into a museum to be unlawful.

The news sparked a wave of criticism, with several Christian leaders speaking out against the decision.

In the Vatican's first reaction to Turkey's decision, Pope Francis on Sunday joined the chorus of condemnation.

"I think of Haghia Sophia, and I am very saddened," Pope Francis said during his midday sermon in Saint Peter's Square, adding little more to elaborate.

A tourist magnet for Istanbul, the Haghia Sophia was first constructed 1,500 years ago as a cathedral in the Christian Byzantine Empire. It was used by the Byzantines to crown their emperors.

The building was converted into a mosque after the Ottoman conquest of Constantinople, now Istanbul, in 1453 and became a museum in 1935.

Christian, Jewish and Muslim representatives have criticized the European Union's decision to drop its special envoy for religious freedom. A leading Jewish figure called it "the wrong signal for Europe." (05.07.2020)

One of the oldest Christian churches in the world is under extreme pressure from the Turkish state. That doesn't bode well for the future, says Alexander Görlach. (23.06.2020)