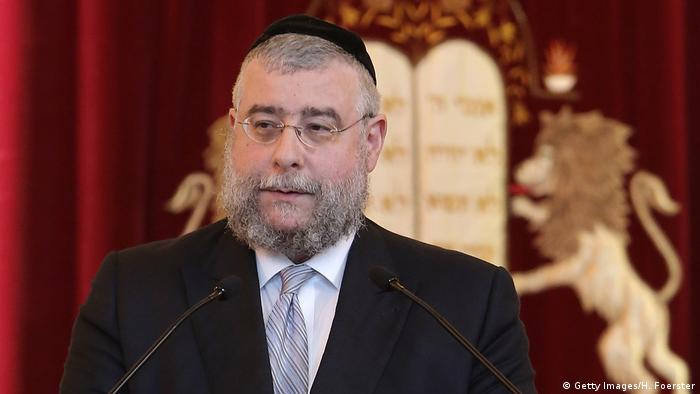 Pinchas Goldschmidt, president of the Conference of European Rabbis, says the move sends 'the wrong signal'

Leading figures from Europe's Christian, Jewish and Muslim communities have voiced concern after the European Commission decided to get rid of the EU special envoy for the promotion of religion or belief outside the bloc.

In an interview with DW, the president of the Conference of European Rabbis, Pinchas Goldschmidt, called the move "the wrong signal" at a time "in which Jews and other religious minorities are increasingly being targeted online and offline by extremists, and the free exercise of religion is being undermined."

The post of special envoy was created by former European Commission President Jean-Claude Juncker in 2016 in response to a  European Parliament appeal, following massacres of religious minorities in Iraq and Syria by the terrorist group "Islamic State."

In mid-June of this year, the Commission, now under the leadership of Ursula von der Leyen, announced that the position would not be retained. The tasks formerly entrusted to the envoy are to be carried out by the Commission's vice president, Margaritis Schinas, and the EU's special representative for human rights, Eamon Gilmore.

The chairman of the Central Council of Muslims in Germany, Aiman Mazyek, also voiced criticism of the Commission's move in an interview with DW. He said that in view of attempts to restrict religious freedom even within the EU, it was "all the more important that the voice of such an envoy is not silenced particularly now."

Mazyek was referring to attempts in some European countries to ban the wearing of headscarves and the slaughter of animals according to particular religious codes.

The highest-ranking Orthodox figure in Germany, Metropolitan Augustinos, also emphasized to DW how important such a position was at the current time.

He cited the debate surrounding the Hagia Sophia in Istanbul as an example of a controversy where the EU special envoy could set out a clear European stance. Turkish President Recep Tayyip Erdogan has recently proposed making the famous site, which has been both a Christian church and a mosque before becoming a museum in 1935, a mosque once more in line with the wishes of Turkish nationalists.

Catholic Cardinal Jean-Claude Hollerich, the president of the Commission of the Bishops' Conferences of the European Union (COMECE), praised Jan Figel, the former holder of the position, for strongly representing the EU's efforts to fight for religious freedom for all on an international basis.

Christoph Strack contributed to this report.