Recep Tayyip Erdogan is set to hold greater powers than any other Turkish leader has seen in decades. Former German Chancellor Gerhard Schröder was among the dozens of world leaders attending the lavish ceremony. 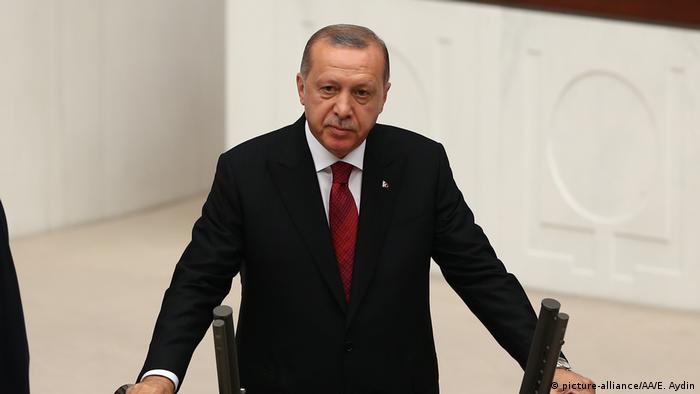 Turkey's Recep Tayyip Erdogan officially assumed sweeping new powers on Monday, as he was sworn in for his second term as president — complete with most of the powers he had held for a decade as prime minister, plus a few more besides.

Turkey's transition from a parliamentary democracy to a system featuring an all-powerful executive presidency marks the country's largest shift in governance since the Turkish republic was founded out of the ruins of the Ottoman Empire almost a century ago.

Under the new presidential post, Erdogan will have sweeping powers over Turkey's judiciary, as well as the ability to rule by decree.

The Day – More Power to the President

"As president, I swear upon my honor and integrity, before the great Turkish nation and history, to work with all my power to protect and exalt the glory and honor of the Republic of Turkey and fulfill the duties I have taken on with impartiality," Erdogan said as he took his oath during a special parliamentary session in Ankara.

After the swearing-in, Erdogan visited the mausoleum of Mustafa Kemal Ataturk, the founder of the modern, secular Turkish republic. Upon the president's arrival, soldiers fired a 101-gun salute as he entered the presidential complex.

By Monday evening, Erdogan is set to hold a grandiose ceremony at the presidential palace attended by some 10,000 guests.

Erdogan narrowly won a referendum last year pushing for greater presidential powers. That referendum success was followed with a hard-fought election win last month, in which Erdogan narrowly won around 52.5 percent of the vote and his ruling Justice and Development Party (AKP) secured a parliamentary majority through its alliance with the far-right Nationalist Movement Party (MHP).

"Turkey is entering a new era with the presidential oath ceremony on Monday," Erdogan told his ruling AK Party at the weekend. "With the power granted to us by the new presidential system, we will get quicker and stronger results."

Erdogan's new powers have polarized public opinion, with his supporters seeing them as just reward for a leader who has reintroduced Islamist values into Turkish public life, championed the working class and overseen a vast expansion in infrastructure.

Opponents, however, say the new powers mark the creation of a one-man regime and drive Turkey increasingly further away from democracy and free speech— not least after two years of state-of-emergency rule following what Erdogan insists was a failed coup attempt.

Former German Chancellor Gerhard Schröder was set to attend on behalf of the German government. According to a spokesperson for the Foreign Ministry in Berlin, it was usual for the government to send to a former leader to such an inauguration ceremony.

Russian Prime Minister Dmitry Medvedev will also attend, in a sign of the warming ties between Ankara and Moscow.

Venezuelan President Nicolas Maduro, regarded with disdain by Washington but as an ally by Erdogan, was also set to attend. Maduro posted a video on Twitter, appearing to show him on his way to the airport, in which he hailed the Turkish president as a "friend of Venezuela and leader of the new multi-polar world."

Erdogan, however, was under pressure by several opposition lawmakers to postpone the swearing in ceremony, after a deadly train accident earlier on Monday in Turkey's north-western Tekirdag province killed 24 and injured more than 300.

"We are in mourning, the entire country is," the pro-Kurdish People's Democratic Party (HDP) co-chair Fatma Kurtulan told reporters. "We think this ceremony needs to be canceled."

Meral Aksener, the chairwoman of the center-right Iyi ("Good") Party, said on Twitter that Erdogan should have postponed the ceremony "out of respect for our nation's sorrow."

Meanwhile, the main opposition Republican People's Party (CHP) presidential candidate Muharrem Ince took to Twitter to slam Erdogan's decision to go ahead with the luxurious ceremony hours after the rail tragedy: "You have the funds to build palaces, but you do not have money to repair railways ... He keeps having grandiose ceremonies with these resources."