German Defense Minister Annegret Kramp-Karrenbauer thinks as economies struggle due to the coronavirus, a commitment of 2% of GDP to defense spending is no longer an accurate way to measure NATO members’ contributions. 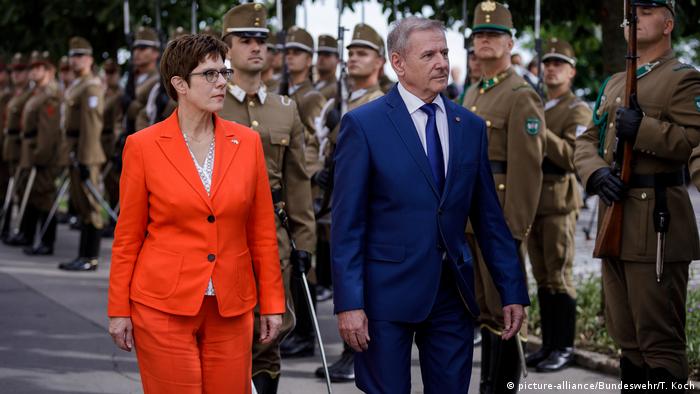 German Defense Minister Annegret Kramp-Karrenbauer on Friday warned that looking at the percentage of a country's GDP spent on defense is an increasingly insufficient measure of commitment to the NATO military alliance.

In comments attributed to Kramp-Karrenbauer, the ministry's Parliamentary State Secretary Peter Tauber said that while Germany aims to allocate around 2% of overall GDP to defense, as previously agreed by NATO members, the country's currently provides around 10% of the alliance's military capabilities.

Tauber made the comments, published by the RedaktionsNetzwerk Deutschland (RND) in response to a parliamentary question by the business-friendly FDP.

Amid slowing economic activity due to the pandemic, the percentage of GDP will offer an even more disproportionate view of what NATO members contribute, as countries will more easily be able to meet their targets, the statement added.

NATO countries agreed in 2014 to increase defense spending to 2% of total GDP by 2024. Germany currently contributes 1.38% of GDP to defense and has faced stiff criticism from US President Donald Trump over the issue.

Last month, Trump said he would withdraw almost 10,000 of the current 34,500 troops residing in the country as punishment for the shortfall in spending.

The comments on NATO commitments came as Kramp-Karrenbauer completed a four-day tour of Eastern Europe, which saw her meet with Hungarian, Bulgarian, Polish, Czech and Slovakian leaders.

Following talks with her Hungarian counterpart, Budapest announced that it would begin to source most of its military equipment from Germany.

The first German-manufactured Leopard tanks are set to arrive on July 24, in what Benko called an "extraordinarily important event."

Hungary has ordered helicopters, tanks and heavy artillery from Germany, as well as bridge layering systems and a guidance system for air defense, at a cost of over €1 billion ($1.14 billion).

Kramp-Karrenbauer said the meeting was both intensive and friendly, as it was "between partners who are very close in the field of security and defense policy, who value each other."

The Defense Ministry intends to make amends with gay soldiers who were rejected from promotion and subjected to medical exams. But will the plan address historical cases and other anti-LGBT+ discrimination? (10.07.2020)

German Foreign Minister Heiko Maas said US troops in Germany is central to transatlantic and European security. Defense Minister Annegret Kramp-Karrenbauer said that security was "not a commodity." (16.06.2020)

Germany's defense minister has said the Special Forces Command (KSK) will not be immediately disbanded over far-right extremist links. Instead, she urged soldiers to change the elite unit from the inside out. (01.07.2020)