Germany's defense minister has said the Special Forces Command (KSK) will not be immediately disbanded over far-right extremist links. Instead, she urged soldiers to change the elite unit from the inside out.

Germany's Special Forces Command (KSK) will not immediately be completely disbanded over far-right links, but given a short time to show it can change from within, German Defense Minister Annegret Kramp-Karrenbauer announced on Wednesday.

In the wake of numerous revelations of far-right activity among the KSK's ranks, a task force was asked to urgently investigate. Announcing the results alongside Bundeswehr Chief of Defense Eberhard Zorn, Kramp-Karrenbauer said the unit would be given time to put its own house in order.

"The analysis concludes that the KSK cannot persist in its current form. That it must be changed from the inside out and that it must be better reintegrated into the Bundeswehr."

"We will give the KSK time to press the reset button," said the minister. 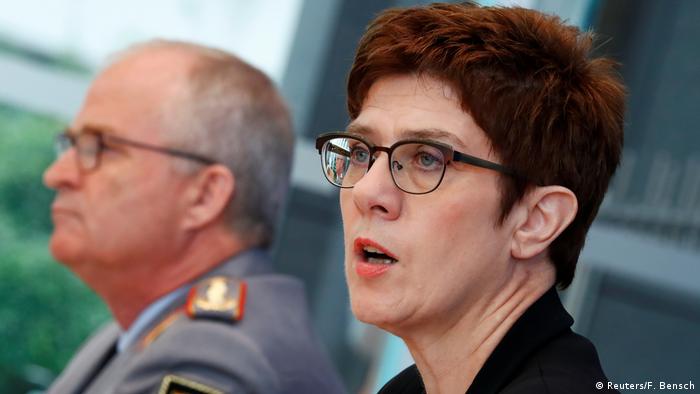 Kramp-Karrenbauer had already announced structural reforms of the KSK unit, which include the dissolution of one of its four combat companies. She warned that, should the KSK fail to make sufficient progress by the end of October, it would be disbanded as a whole.

"If we let things go on then the danger is indeed great that we will have a real structural problem for the future," she said.

Author and Bundeswehr expert Thomas Wiegold told DW that the minister was "trying to get rid of those toxic parts in this unit without disbanding the unit as a whole, without destroying the capability they need."

In May, police seized explosives and weapons at the home of a KSK soldier. Kramp-Karrenbauer had previously described the disappearance of 48,000 rounds of ammunition and 62 kilograms of explosives as "disturbing" and "alarming."