New figures on extremism in German military ′tip of the iceberg′ | Germany | News and in-depth reporting from Berlin and beyond | DW | 27.01.2020 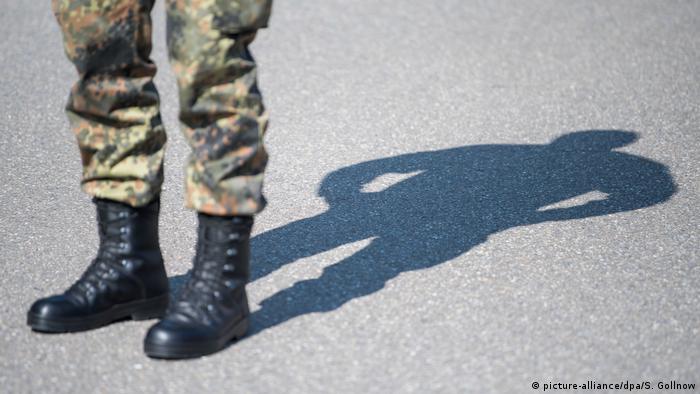 Germany's top military intelligence agency is currently investigating over 500 cases of suspected right-wing extremism within the country's armed forces, the Bundeswehr. That number marks an uptick of 30% from the previous year, according to the agency's director.

Those figures are likely just the "tip of the iceberg," Caroline Walter, co-author of "Extreme Security" (Extreme Sicherheit), a book on right-wing extremism within Germany's military and its law enforcement agencies, told DW.

"The problem in the Bundeswehr is that whoever points out right-wing extremism is still a backstabber who's violating the spirit of the brigade," she said.

A number of cases over the past five years have revealed German authorities' blind spots to extremism.

The most prominent case involved a German soldier known as Franco A., who in 2017 reportedly posed as a Syrian refugee in order to infiltrate immigrant communities and carry out a terror attack.

Years later, as Franco A. stands trial, German government figures continue to indicate the prevalence of extremism within the military, law enforcement agencies and society at large.

Some 360 new cases of right-wing extremism in the military cropped up in 2019 alone, bringing the total number of investigations to 550, Christof Gram, president of Germany's Military Counterintelligence Service (MAD), told the Welt am Sonntag newspaper. That figure includes 20 investigations into Germany's elite special commandos, Gramm said.

In total, authorities identified over 24,000 active right-wing extremists in 2018, with over half considered capable of violent attacks. They estimate that number will have increased by one-third in 2019, in large part due to new scrutiny on affiliate groups of Germany's anti-immigration Alternative for Germany (AfD), the nation's largest opposition party in the Bundestag.

German police and military officers already harboring negative views about immigrants and refugees are particularly susceptible to radicalization and extremism, the Federal Office for the Protection of the Constitution, Germany's domestic security agency, announced in an April 2019 report.

"Speeches are not gonna stop anti-Semitism"

New revelations about the scope of extremism in the German military comes as the nation continues to grapple with increasing right-wing and anti-Semitic violence, and amid the backdrop of this week's 75th anniversary of the liberation of the Auschwitz death camp, where over 1 million people, mostly Jews, were murdered by the Nazi regime.

"In our opinion, there are clear cases of anti-Semitism which the judiciary still can't recognize as anti-Semitism," Josef Schuster, president of the Central Council of Jews in Germany, told the Tagesspiegel newspaper on Sunday.

Crimes motivated by anti-Semitism increased nearly 20% in 2018, the last year for which police statistics are available. Such peaks are in line with nearly two decades of increasing right-wing and anti-Semitic criminality in Germany, despite sinking crime rates overall, statistics show.

2019, however, was seen as a watershed moment for authorities. In June, a leading politician in the city of Kassel, Walter Lübcke, was gunned down in his home by a suspected right-wing sympathizer. And in October, an avowed white supremist killed two passersby in the eastern German city of Halle, after failing to gain entry into a synagogue to commit a massacre on the Jewish holy day of Yom Kippur.

In December, German Interior Minister Horst Seehofer cited both cases as catalysts for sweeping plans to restructure domestic intelligence and law enforcement agencies in 2020 to fight extremism, including the creation of 600 new intelligence positions.

"I'll never forget a young citizen in Halle calling through the silence that 'you all can't protect us," Seehofer told reporters at the time. "As a consequence of Halle, we want to confirm to the public: Many steps are being taken."

"It's important for us to say that there is no tolerance for extremism in our organization," he said.

Even so, Tobias Lindner, a politician with Germany's Green Party, who serves in the Bundestag's Defense Committee, told DW that "the magnitude of the problem" with extremism within the military is such that more systemic reform is needed.

Author Caroline Walter shares that sentiment, especially when considering the tactics of Germany's "new right," which practices subtler forms of extremism on the internet not easily recognizable to authorities. "It's much more difficult to weed them out," she said.

If left to fester, such extremist thoughts can turn into a "bitter reality," especially for particularly vulnerable groups like immigrants and Jews, German Foreign Minister Heiko Maas wrote in an op-ed for magazine Der Spiegel.

"It doesn't surprise me that nearly every second Jew in Germany has thought about leaving the country," he said. "We must urgently take countermeasures so that such thoughts don't turn into bitter reality and it doesn't come to a massive exodus of Jews from Germany."

"That people of Jewish faith no longer feel at home here is a real nightmare — and a disgrace, 75 years after the liberation of Auschwitz," he added.