Moscow's wave of protests has no leader, but 31-year-old Lyubov Sobol has emerged as one of its most visible protagonists. Instead of participating in a weekend protest, she was detained by police in the Russian capital. 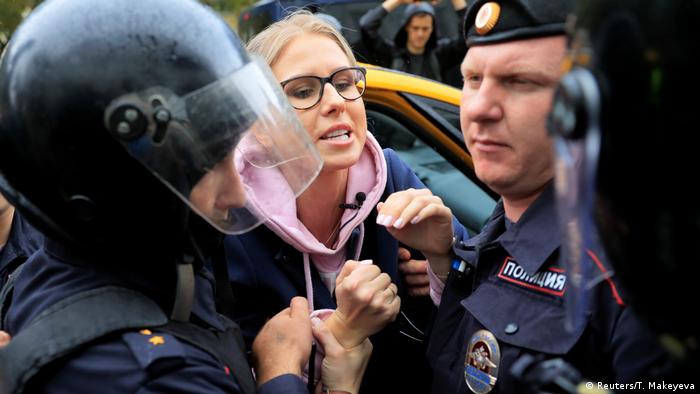 Lyubov Sobol was not among the thousands of people who took to the streets of Moscow on Saturday to vent their anger over regulations placed on an upcoming city election. Sobol, who was kept from running for a council seat, was instead detained by police.

"I won't make it to the rally, but you know what to do without me," she wrote on Twitter.

It's the second time in two weeks police prevented her from attending a public demonstration. Last weekend, Moscow police dragged Sobol from a taxi, preventing her from attending Saturday's unauthorized "protest stroll." More than 800 activists were arrested at the event. One week earlier, more than 1,300 people had been detained and many injured at a similar protest. Sobol was taken to court and forced to pay a fine for participating in a previous opposition rally. She was questioned in connection with another case and released later that evening. 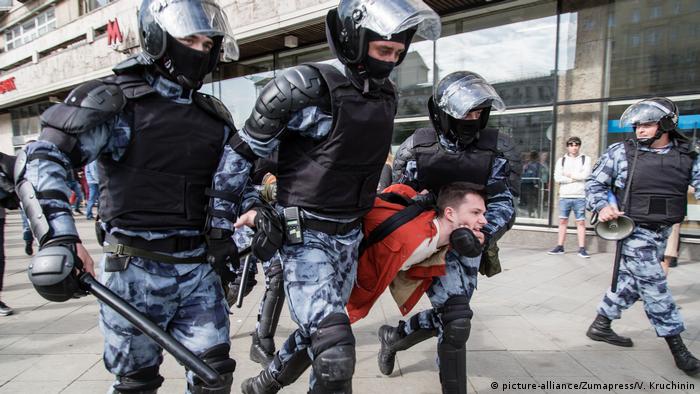 Police have detained over 1,300 protesters taking part in recent demonstrations

Muscovites have been protesting for fair elections for weeks. It all began when Sobol and other opposition figures were barred from running in September's Moscow city council elections. Authorities claimed they had submitted lists with forged signatures of voters.

The city council elections, which in previous years received little attention, are making headlines because Moscow's residents are considered especially critical of the Kremlin. And with the country's ruling United Russia party losing popularity, the capital's local elections are regarded as a critical test of the political mood.

The current protest wave is reminiscent of the opposition movement that took to streets in the winter of 2011/2012 calling for fair elections – even though it has not reached those dimensions just yet. Then, as now, protesters took aim at Putin's political system. And, once again, the protesters lack a clear leader – though 31-year-old Sobol has emerged as a major opposition figure.

Sobol made a name for herself as a lawyer with Alexei Navalny's Anti-Corruption Foundation (FBK). Sobol, who studied law at the prestigious Moscow State University, has worked with Navalny, one of Russia's most fervent Putin critics, for years. In 2018, she was elected to the central council of Navalny's Progress Party, which is prohibited from contesting the upcoming elections. 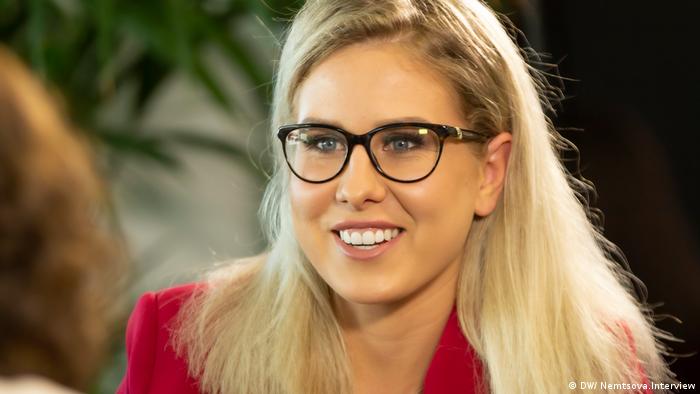 Given these obstacles, Navalny and his team have begun focusing on disseminating videos online that bring to light corruption among high-ranking Russian powerbrokers. Sobol has played an important role as she is often featured in and manages the "Navalny-Live" YouTube channel, which has over a million subscribers.

This is Sobol's third attempt to run in the Moscow city council elections since 2014. Previously, she withdrew her candidacy once due to a lack of supporting signatures and another time because she failed to consult other opposition parties. This year, however, her candidacy had got off to a promising start as she gathered more signatures than necessary. But then the electoral commission claimed 14% of the signatures were "not correct" — an accusation Sobol has denied.

Sobol has also done her part to remain in the headlines.

Before being barred from contesting the Moscow elections, it emerged that popular hospice activist Anna Federmesser was planning to run in Sobol's electoral district. Navalny, Sobol and other opposition figures urged Federmesser not to run, arguing that United Russia was using her to prevent an opposition figure from winning the seat. Ultimately, Federmesser withdrew her candidacy, saying she had been pressured to do so.

In an interview with DW's Zhanna Nemtsova this June, Sobol praised Federmesser for the step, saying she "has made the right decision withdrawing her candidacy and choosing not to be part of the dirty campaign waged by Moscow's municipal government."

Will Sobol take a page from Navalny's playbook?

Sobol went on a hunger strike in mid-July to protest the election participation ban. When she later refused to leave Moscow's electoral commission, police carried her and the sofa she was sitting on out of the building.

If none of these steps get the ban lifted, Sobol plans to emulate Navalny's tactic of calling upon voters to cast ballots for a random candidate from any party other than United Russia.

Sobol's style also has its critics. She drew criticism, for example, for intercepting the editor-in-chief of Russia's international broadcaster RT, Margarita Simonyan, in the halls of the Echo of Moscow radio station. Sobol asked Simonyan critical questions about local politics while attempting to film the encounter. Simonyan, pregnant at the time, complained that Sobol had pestered her.

Sobol later told DW that support for her jumped after she confronted Simonyan, "The number of my subscribers on social networks has grown faster than ever and my posts have garnered more likes than ever since the Margarita Simonyan incident."

Moscow authorities arrested more than 800 people for participating in an unauthorized rally. But some residents said they "had no option left but to protest" in the face of a growing crackdown on independent candidates. (04.08.2019)

Moscow issued the statement after DW condemned the arrest of correspondent Sergey Dik. The allegations come amidst a violent crackdown on opposition rallies. (05.08.2019)

Russia's opposition leader Alexei Navalny has become one of the most prominent figures of the anti-Putin protest movement. The lawyer-turned-activist was barred from challenging Putin in the 2018 presidential election. (02.08.2019)