Moscow issued the statement after DW condemned the arrest of correspondent Sergey Dik. The allegations come amidst a violent crackdown on opposition rallies. 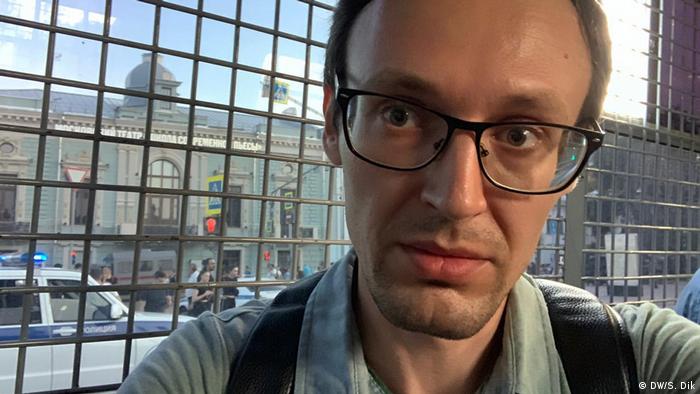 Russia's Foreign Ministry accused Deutsche Welle on Monday of meddling in Moscow's affairs, claiming that DW's Russian language social media was being used to promote unrest against the government.

Without providing evidence, she had claimed on Russian state television the previous night that DW had published a call for action in Russian addressed to the residents of Moscow, telling them to take to the streets.

DW has rejected the allegations, believing them to be connected to the arrest of correspondent Sergey Dik late last month.

Moscow has recently launched a violent crackdown on protesters demanding that independent candidates be allowed to contest upcoming municipal elections. Some 800 demonstrators were arrested on Saturday at an unauthorized rally in the capital.

While covering an opposition rally on July 27, DW correspondent Sergey Dik was among those detained by officers. When he showed his press credentials to the police, they called it "some worthless document" before taking him to a Moscow police station. He was released later that day.

In response to Dik's arrest, DW issued a statement condemning the "arbitrary obstruction of the work of an accredited journalist," and asking for an explanation.

This statement apparently prompted Zakharova to accuse DW of incitement to protest. Without pointing to a specific incident, report, or social media post from DW's Russian service as evidence of the claim, Zakharova went on to say that because of the alleged incitement, Sergey Dik was no longer acting as a journalist and therefore shouldn't have been able to enjoy the protection usually afford to the press.

DW Director General Peter Limbourg made it clear on Monday that this excuse was unacceptable, saying "when journalists who are reporting on a demonstration are across the board declared as participants, it is not just a blatant violation of the freedom of the press but rather the behavior of a police state."

Moscow protests: 'It is our civic duty to go out on the streets'

Young and old gathered in central Moscow on Saturday to demand a free and fair election. Nearly 700 people were detained in the latest opposition rally but the protesters who spoke with DW said they wouldn't be deterred. (04.08.2019)

Russia: Demonstrators defiant ahead of opposition rally in Moscow

A recent police crackdown on protesters pushing for fair local council elections in the Russian capital has not deterred demonstrators. Thousands are expected to rally again over the weekend. (03.08.2019)

Russia cracks down on protests against mobilization 21.09.2022

Across Russia, more than 1,000 people have been detained for protesting against Vladimir Putin's announcement of a partial mobilization. Others, meanwhile, have opted to leave the country.

Officials in a Russian region bordering Georgia say the restrictions came after 20,000 people crossed the border in two days. Russians have increasingly sought ways to avoid being drafted.