Moria refugee camp: Germany to take in up to 150 children

German Interior Minister Horst Seehofer announced ten EU countries would take in a share of 400 unaccompanied minors from Greece. The EU is also set to propose a new agreement on migration and asylum in the bloc. 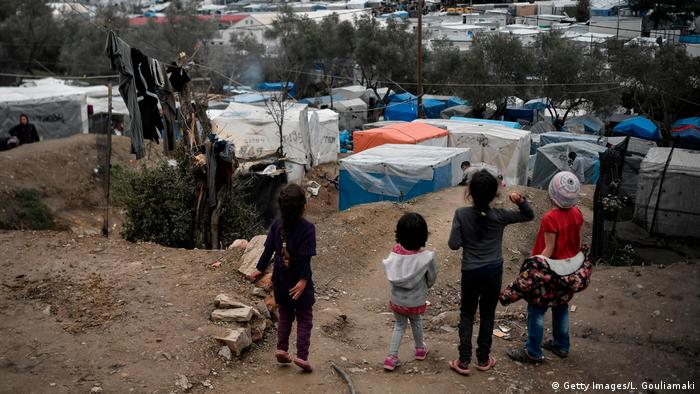 Germany should take in several thousand migrants made homeless by several blazes at the Moria refugee camp on the Greek island Lesbos, Development Minister Gerd Müller said on Friday.

In an interview with public broadcaster Deutschlandfunk, Müller reacted to the Berlin government's announcement that it would likely offer refuge to 100-150 unaccompanied minors affected by the incident.

He insisted that Germany should set an example and accept 2,000 residents from the burned-down camp.

In addition to Germany, France and eight other EU countries have declared their willingness to receive a total of 400 unaccompanied minors, with France also taking in between 100 to 150 people.

The Netherlands also on Thursday declared its willingness to take in 100 unaccompanied minors.

Countries such as Poland, Hungary, the Czech Republic, and Slovakia have refused to accept compulsory intakes of refugees.

Schinas suggested that a new "center" will be built at the Moria site and that the Greek government had asked the EU to play a "more active role in managing it."

Commenting that 300 to 400 migrants arrive in Germany each day, Seehofer said, "We are seeing numbers not unlike those we saw at the height of the refugee crisis." Seehofer went on to say: "I take the sentence '2015 cannot and must not be repeated' very seriously."

He noted that if Germany once again took in a large contingent of refugees without consulting its EU neighbors, "2015 would repeat itself and there would be no European solution."

Schinas stressed that Europe could no longer afford to live without a common refugee policy, urging a more durable solution in which "responsibility for refugees is shouldered together."

"Moria is a sharp reminder to all of us for what we need to change in Europe," said Schinas, confirming that the European Commission will unveil proposals for a new pact on migration and asylum on September 30.

The migrant topic spurred heated debate in Germany's parliament on Friday. Prior to the session, aid and charity organizations penned an open letter to Chancellor Angela Merkel, calling on her to assist those in need.

The Central Committee of German Catholics (ZdK), for instance, called on the federal government to "take a truly sizable number of refugees from Moria and deliver them from their unimaginable misery." The ZdK urged lawmakers to work with states and cities that have said they are willing to take in refugees.

Seehofer defended the low number of refugees to be accepted, saying that by taking between 100 and 150 people, Germany was exhibiting "brotherly love." He also pointed out that Germany has taken in some 1.73 million refugees since 2015.

Dietmar Bartsch, parliamentarian of the socialist Left Party was not convinced. He called out Seehofer during the debate, using Bible quotes to chastise him, saying: "Your behavior isn't Christian, it's inhumane." Bartsch said, "European Union values went up in flames in Moria."

Others, namely the right-wing populist Alternative for Germany (AfD), were unhappy that Seehofer agreed to accept refugees. Beatrix von Storch, deputy leader of the far-right populist Alternative for Germany (AfD), told DW Germany should help "rapidly reconstruct the refugee camp" and that accepting refugees from Moria would send the wrong signal. 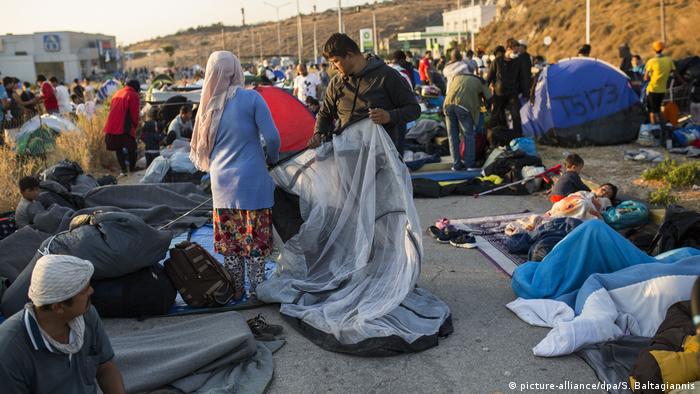 There were over 12,000 people living at the Moria camp when it burned down

The agreement would set forth management measures for the entire migration route, from origin and transit countries to the receiving countries in the EU.

EU Commissioner for Home Affairs Ylva Johansson told DW that she is optimistic that all EU member states will back the pact.

Read more: Lack of EU unity on asylum keeps refugees at the margins

"I have spent a lot of time talking with member states, parliaments, and other stakeholders," said Johansson. "And I do think that we can present holistic proposals that can get acceptance from all member states."

Antonio Vitorino, the director-general of the International Organisation for Migration, has called for a system of shared responsibility among EU member states on migration and asylum.

"We are definitely expecting that the pact on asylum migration that the European Commission has promised to put forward by September 30, but let's be clear, there are splits among the European member states in relation to migration and asylum," Vitorino told DW. "We need to build a strong political will to address the deep root causes of migration. That's the major lesson from the 2015 crisis."

Vitorino said the announcement that 10 EU member states will relocate nearly 400 unaccompanied minors from the Moria camp was not enough and more must be done.

"It's not enough, but it's a great help in these current circumstances," he told DW. "What happened in Moria is a catastrophe, a humanitarian catastrophe that, to be honest, was just a catastrophe in waiting because the camp is overwhelmed."