More women have joined Germany′s executive boards — but not many | Business | Economy and finance news from a German perspective | DW | 27.10.2021

More women have joined Germany's executive boards — but not many

The number of women on the executive boards of Germany's publicly traded companies is slowly going up. But when it comes to gender parity, Germany still lags far behind other developed countries. 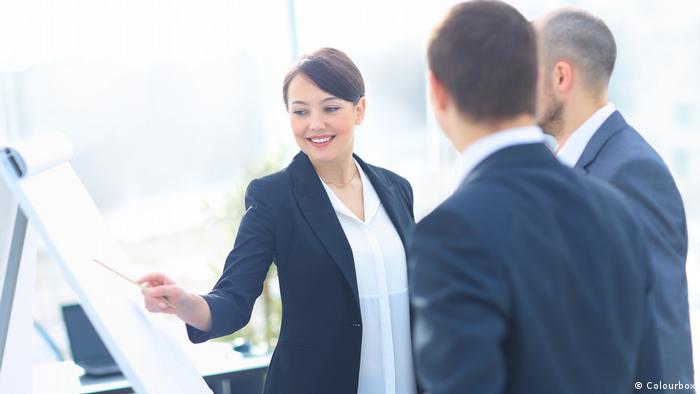 One of a company's main goals is to turn a profit. Study after study have shown that as a rule profits tend to go up with the number of women filling management positions. In 2020, the consulting firm McKinsey showed that companies with higher gender diversity are 25% more likely to have above-average profits. Yet in Germany, the country's largest publicly listed companies are still mostly run by men.

At least this year, however, some progress has been made. As of September 1, 2021, 603 men and 93 women filled the executive boards of the 160 companies that make up Germany's three main stock market indexes, according to a report just released by the AllBright Foundation, a Swedish-German political nonprofit. That's 25 more women than last year and the largest-ever increase in the number of women on executive boards within a single year.

This might sound good at first. But more than half of all companies listed on these indexes — the DAX, MDAX and SDAX — still don't have one single woman at the top management level.

"I'm pained by the waste of resources when well-educated women don't help shape our economy and society as much as men do," said Sven Hagstromer, founder of the AllBright Foundation. "And it's something we can't afford, especially in light of the skilled worker shortage and aging population [in Germany]."

If change continues at the rate recorded since the study was first launched five years ago, it would take 26 years for an equal share of women and men to be present on the boards of these 160 companies. At the accelerated pace seen over the last year, it would take only 11 years for Germany's executive boards to reach gender parity.

"So, we're seeing a positive development, but to be clear, it's nowhere near enough," Wiebke Ankersen and Christian Berg, managing directors of the AllBright Foundation, wrote in the introduction to this year's report.

The path to putting more women in leadership positions won't be comfortable, the directors said, because "more women means fewer men at the top of companies." Achieving that will require less complacency and more courage, they said.

These German companies are stuck in a pattern of filling executive board positions with new members that resemble the old ones, a phenomenon the foundation has dubbed the "Thomas cycle" — referring to the most common name among Germany's executive board members. Board members tend to have similar profiles when it comes to gender, education, age and origin.

As a result, this means that an overwhelming share of the executive board positions among Germany's 160 publicly listed companies are filled by male economists in their 50s with roots in former West Germany.

And it's not only women who fall by the wayside. People who completed their studies in former East German states made up only 2% of the board members this year, up from 1% the year before.

An international embarrassment for Germany

The state of affairs in Germany is the exception, not the rule, among similar countries. In an international comparison of the 30 leading companies in each country's most important stock index, the United Kingdom, Sweden and France all have more women in management positions than Germany. Executive boards with at least two women have long been the norm in these countries.

The United States is leading the way when it comes to gender parity among management. Gender parity is achieved when the underrepresented group makes up a 40% share of the board, according to the AllBright Foundation report.

In the US and France, 97% and 83% of large companies, respectively, have multiple women on their boards. In Germany, that figure is only 23%.

While in the US all 30 companies on the prominent Dow Jones stock index have female executives, four of Germany's top 30 companies still have boards made up entirely of men.

Deutsche Telekom and Daimler, two of Germany's largest companies, are the closest to achieving gender parity, with 38% of their executive board positions filled by women.

When considering all 160 listed companies, only five achieve this benchmark; 11 companies have no women on either their executive board or their supervisory boards.

The current state of affairs is hard to understand when one considers that it's been 20 years since German companies made a public commitment to achieving a higher share of women in management positions.

The German government later followed suit, introducing in 2016 a quota of female members for the supervisory boards of large and publicly listed companies. At least 30% of supervisory board seats for companies above a certain size (generally 2000 employees or more) must be filled by women.

Since August 2021, a quota has also applied to other management positions. At least one woman must now sit on the executive board of companies that are publicly listed as well as at companies that have a large number of employees. For companies where the federal government holds a majority stake, there are even stricter rules.

Publicly listed companies are also required by law to publish targets for increasing the share of women on their boards. However, they have the right to set a "target of zero," meaning they aim to add no women to the board.

This year, 37 of the 160 companies on Germany's main stock indexes currently have this target of zero, down from 55 companies last year. Two former German startups, Delivery Hero and HelloFresh, are the only DAX-40 companies that still have no plans to have women on their boards as of September 2021.

Femocracy - Women on the political stage