The under-representation of women in German boardrooms has been a matter of debate for years. Now, Angela Merkel's government has tabled a new bill to help boost the numer of female executives in top jobs. 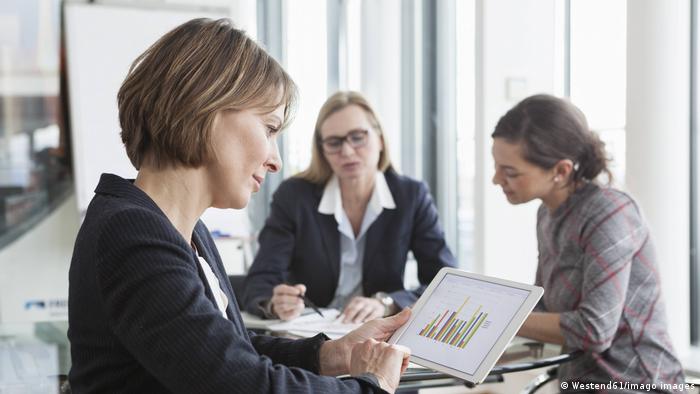 The German government on Wednesday signed off on a landmark bill to boost the number of female executives in the country's corporate boardrooms after companies failed to voluntarily close the gender gap.

Listed companies with four executives or more must appoint at least one woman to their boards, according to a draft law to be voted on by parliament.

"We can show that Germany is on the way to becoming a modern society fit for the future," Family Affairs Minister Franziska Giffey said.

Just 12.8% of management board members at Germany's 30 largest listed companies — those in Frankfurt's blue-chip DAX index — are women, according to the AllBright Foundation, which works to promote boardroom diversity.

Female representation has fallen back in Germany during the coronavirus pandemic. It is the only major economy to see such a decline, with 11 DAX companies still led by all-male board executives, AllBright said in October.

Women earn an average of 20% less than men in Germany, compared with 14% less across the European Union.

Companies in which the government holds a majority stake will have stricter rules, with at least one woman on management boards with more than two members.

German research institute DIW said it welcomed the women's quota but noted that female participation in management boards continues to move at a "snail's pace."

Former Siemens executive Janina Kugel, now a consultant and equalities campaigner, told DW that the new quota would be "a very important signal."

"The perception of Germany is that, because we've had a female chancellor for the last 15 years, Germany is very progressive in that matter,but actually it is not,"she said.

"It's very conservative when it comes to role models' behavior and what men should doand women should do."

The agreement will build upon a 2015 law that ensures a 30% quota for women on German supervisory boards.

Sitting on a supervisory board is a non-executive role. Its members are usually chosen by company shareholders. Their job is to promote good governance, hire and fire senior management and review major business decisions taken by the chief executive.

But she stepped down in April, leaving Christian Klein as the company's sole CEO.

However, Belen Garijo is set to take over the reins of pharmaceutical firm Merck in May.

Daimler, the Stuttgart-based auto giant, has two female executives currently serving on its management board.

Opinion: Germany's new record for female executives is no accident 07.01.2022

The number of women on the executive boards of German companies has hit a record high. This kind of change doesn't happen on its own, says DW's Kristie Pladson.

New Merck CEO Belen Garijo is the second women to reach the top of a DAX company, and the only one to hold the reins alone. It's a rare example of a female executive making it to the summit in the German business world.