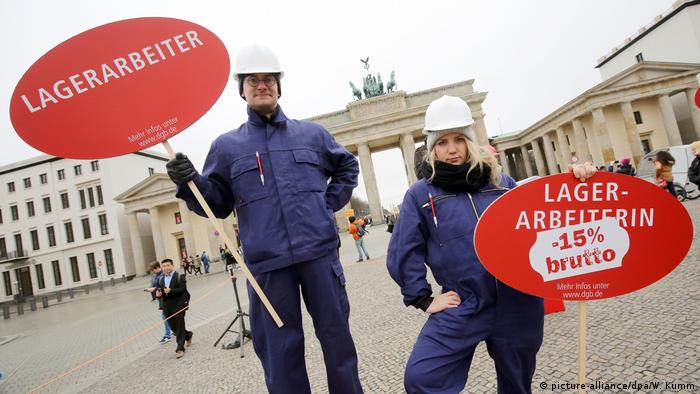 The gender pay gap between men and women in Germany fell by 1% in 2019, but it was still higher than the European Union average, according to new figures from the Federal Statistical Office published on Tuesday.

"Viewed over a longer period of time, a slow but steady decline can be observed in Germany," the report read, noting that the gap in 2014 stood at 22%. The figure takes a look at all jobs and all qualifications, adjusting only for gender differences.

When the wage gap is evaluated for men and women employed in the same number of hours, with the same qualifications and in the same kinds of jobs, the gap narrowed to 6%.

Experts have long attributed Germany's gender pay gap to the differences in career choices, with women working in lower paid professions and industries.

Women are also more likely to work part-time or reduced hours, often because they still bear the brunt of childcare and housekeeping responsibilities.

Moreover, women in Germany are less likely to occupy higher management positions in most industries.

Germanys 2019 numbers still put it above the average and last year, it ranked second worst after Estonia, which posts the highest wage gap in the EU at 22%.

The EU countries that registered the narrowest gaps in wages between men and women were Luxembourg at 1%, Romania at 2% and Italy at 4%.

Countries like the Netherlands, Denmark and Ireland landed roughly at the average with 14-15%, while nations like Croatia, Hungary and Sweden were just below at an average of 10-12%.

The gender pay gap in Germany is driven by a higher inequality in the West, as the states which made up the former East Germany had markedly narrower gaps in 2018.

In the states of Brandenburg, Mecklenburg-Western Pomerania, Saxony, Saxony-Anhalt and Thuringia the pay gap was on average 7%.

This can be attributed to the fact that wages are generally lower in eastern Germany, but also to cultural patterns of childcare and female participation in the labor force, which was much higher in the East prior to reunification.

The gender pay gap shows that women earn less than their male colleagues in the same job. But the indicator is also a political instrument and can ruin any debate if used in the wrong context.