Mobile World Congress is about conversations, not devices | Business | Economy and finance news from a German perspective | DW | 22.02.2019

Mobile World Congress is about conversations, not devices

This year's Mobile World Congress in Barcelona takes place against a backdrop of tension between politics and technology. It's worth paying attention to the conversations that happen there. 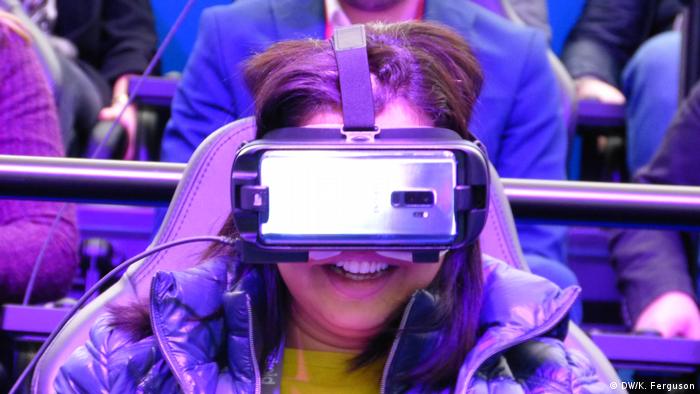 The Mobile World Congress (MWC) in Barcelona is a dizzyingly large event. Over 2,000 companies exhibit their products and services at the event. Most of them claim their latest innovations will change people's lives, or at least disrupt an industry.

There are robots at every turn. Self-driving cars too. And a seemingly endless supply of well-dressed executives with firm handshakes and stacks of business cards to share. As a journalist, one of your most valuable skills is a power walk so purposeful that the PR people — who eye you up like a lion does its prey — don't even bother to stop you for a "quick chat about how we're transforming the tech space."

But beyond the schmoozing and the jargon is a glimpse of what the future holds.

The theme of this year's MWC, taking place in Barcelona from February 25-28, is "Intelligent Connectivity." The term is broad enough to cover the technology associated with anything from smartphones to smart cities.

One number and one letter will dominate: 5G. The latest, fastest, snazziest system of mobile networking has been at the center of previous Mobile World Congress events. But it's only in recent times that it's entered the mainstream conversation. One reason for this is that Huawei, one of the companies at the forefront of the technology, has been making the headlines of late.

It wasn't long ago that few people outside of Asia had heard of the Chinese firm. Now it's a household name around the world. As well as becoming known for its technological prowess, Huawei has garnered attention for its symbolic association with a year-long trade dispute between Washington and Beijing.

For Huawei, the Mobile World Congress has traditionally presented an opportunity to showcase itself to an audience more interested in tech specs than in politics.

Last year, it unveiled a new range of tablets and notebooks. This year, it's expected to launch a foldable phone that will — crucially — be capable of connecting to a 5G network.

5G is the technology that will enable major transformations to our everyday lives. Its super-fast speed and low latency will enable cars to drive themselves and doctors to monitor their patients' health remotely. It will also allow companies to tailor ads to their potential customers based on the information they gather from their devices in real time. And as more of our home devices get connected to the internet, it will allow those messages to penetrate our most intimate sphere.

On top of that, 5G is the standard of mobile networking required to power advancements in artificial intelligence. The sector, which is increasingly blurring the boundaries between the capabilities of humans and machines, is projected to be worth $70 billion (€61.75 billion) by next year.

Read more: What is 5G and why do we care?

The prospect of robots replacing humans in the workplace is nothing new. Industry leaders at the Mobile World Congress will be advancing the conversation by considering the skills humans will need in order to work alongside these "informed, sentient collaborators."

They will also be debating the ethical implications of outsourcing complex intellectual tasks from humans to machines. One panel discussion will focus on attempts to democratize artificial intelligence and to eliminate algorithmic bias.

As these discussions take place, most of the headlines about next week's gathering of tech titans in Barcelona will focus on the unveiling of fancy gadgets.

But that is not entirely what the event is about. Ultimately, it is about how technology is capable of shaping human behavior and even thought. With so many of the world's leaders in tech gathered in one place, the real work is in interrogating where the power lies.

Huawei vows US 'can't crush us'

The founder of Huawei has dismissed claims his company spies for the Chinese government and said that the world cannot do without his company's "more advanced" technology. (19.02.2019)